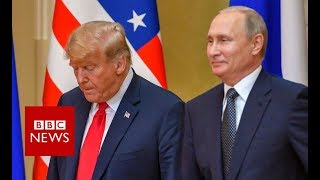 Vladimir Putin spoke first, and said he had made firm proposals on arms control.

“As nuclear powers, we bear special responsibility” for international security, he said.

He said Russia considered it necessary for the two countries to work together on nuclear disarmament and non-proliferation – and to avoid weapons being placed in space.

Donald Trump went on the defensive over his decision to hold a meeting with Vladimir Putin, which has been widely criticised.

“Even during the tensions of the Cold War… the US and Russia were able to maintain a strong dialogue,” he told reporters.

“But our relation has never been worse than it is now. However that changed as of about four hours ago.”

He added that “nothing would be easier politically than to refuse to engage” which would “appease partisan critics, the media” and the opposition.”

But he said, he would rather take the risk.