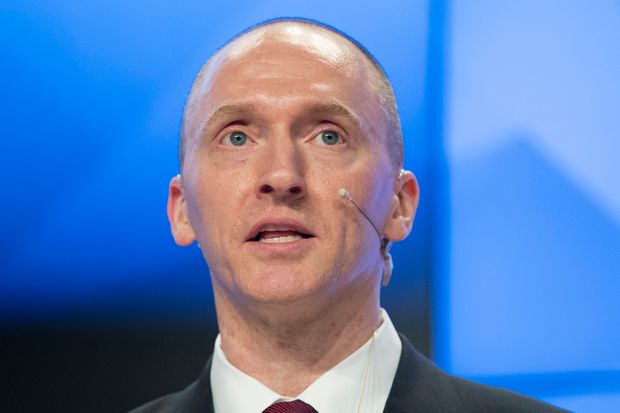 campaign officials in 2016. Some questions follow: Who asked Mr. Halper to keep tabs on the Trump officials, and when and why?

The answers go to the credibility of the Federal Bureau of Investigation’s claim that it didn’t open an official counterintelligence probe into Trump-Russia collusion until July 31, 2016. The answers might also show if Obama Administration officials knew about this mission, or if political actors working for the Clinton campaign such as Fusion GPS played a role.

The New York Times reported on Friday that Mr. Halper’s contact with Trump officials happened only after the July 31 launch of the probe. The story notes that Mr. Halper reached out to campaign adviser

“late that summer” and then to Mr. Page “in the ensuing months.” A Washington Post story adds that Mr. Halper sat down with Trump official

But Mr. Page tells us he actually met Mr. Halper in mid-July, at a symposium at England’s University of Cambridge, where Mr. Halper is an emeritus professor. Mr. Page says the invitation to that event came much earlier—the end of May or early June. Mr. Page declined to say who invited him but says it was someone other than Mr. Halper.

Mr. Halper had a central role in the symposium. The event was hosted by the Centre for Research in the Arts, Social Sciences and Humanities (CRASSH), a Cambridge research institute. And the official organizer was another American academic and alumnus of Republican administrations named

The event was titled “2016’s Race to Change the World,” and headlined the dueling perspectives of former Secretary of State

According to the program, Mr. Halper kicked off the opening session on July 11. Mr. Page confirms he met Mr. Halper for the first time at the symposium.

Another noteworthy participant was Sir

a Cambridge alumnus, spent a near-40-year career at the British intelligence service, MI6, rising to its chief from 1999 to 2004. As such he overlapped with anti-Trump dossier author

who was recruited by MI6 after graduating from Cambridge in the late 1980s, and who later ran the Russia desk. Sir Richard told the Washington Post in February that Mr. Steele’s reputation was “superb.”

Sir Richard is also friendly with Mr. Halper. The two men were part of a small group that ran the Cambridge Intelligence Seminar, an academic forum for researchers and one-time practitioners of spycraft. At least one of these sessions in 2014 featured eventual

The duo made headlines in the United Kingdom in 2016 when they resigned from the organization, which Mr. Halper told the Financial Times was due to “unacceptable Russian influence on the group.”

For the record, Mr. Page says he had never interacted with the CRASSH program at Cambridge before that early summer 2016 invitation. And while he did not speak at the event, he says the organizers paid his round-trip airfare from New York.

Perhaps all of this is a crazy coincidence, but House Intelligence Chairman

is right to investigate. President Trump on Monday tasked Chief of Staff

with ensuring that Justice Department officials let congressional leaders review “classified and other information they have requested.” There’s no excuse for refusing to cooperate.