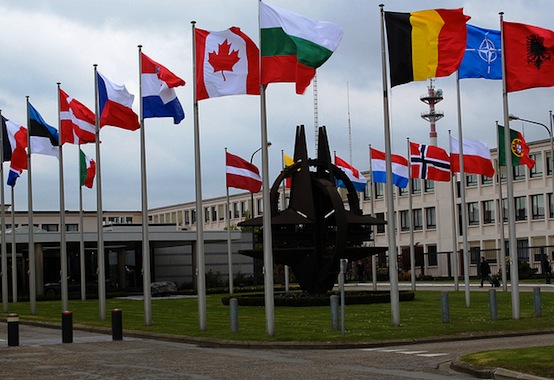 At last week’s NATO summit, President Donald Trump denounced the allies for taking advantage of American taxpayers. Then he approved their latest subsidies. He even agreed to invite a military weakling, Macedonia, to join NATO, which will add yet another nation to our military dole.

When George Washington warned Americans against forming a “passionate attachment” to other countries, he might have been thinking of the Balkans. Indeed, a couple decades later, John Quincy Adams criticized proposals to aid Greece against the Ottoman Empire, which then ruled that region. America “goes not abroad, in search of monsters to destroy,” he intoned.

On into the 20th century, the Balkans were in turmoil. Germany’s “Iron Chancellor,” Otto von Bismarck, warned that “the great European War would come out of some damned foolish thing in the Balkans.” That’s exactly what happened in 1914.

It took decades and two world wars for the Balkans to stabilize. But after the Cold War ended, Yugoslavia, which had emerged from Europe’s previous convulsions, broke apart. One of the smaller pieces was Macedonia.

The battles among the Serbians, Croatians, and Bosnians were bloody and brutal. In contrast, Macedonia provided comic relief. The small, mountainous, landlocked nation of two million people won its independence without a fight in 1991, though Athens launched a verbal and economic war against Skopje over the latter’s use of the name “Macedonia.”

Perhaps modern Greeks feared that a resurrected Alexander the Great would lead the newly freed Macedonian hordes south and conquer Greece. Skopje entered the United Nations under the provisional name Former Yugoslav Republic of Macedonia, or FYROM. In June, after only 27 years, the two governments agreed that Macedonia/FYROM would be called the Republic of North Macedonia—though the decision must still be ratified by the Macedonian people in a referendum.

More serious was the insurgency launched by ethnic Albanians who made up about a quarter of the nation’s population. The battle two decades ago over Kosovo inflamed ethnic relations in Macedonia, eventually resulting in a short-lived insurgency. Although the fighters disarmed, Skopje’s politics remained nationalist and difficult. Last year, a more liberal administration took over, but the country’s democratic institutions remain fragile.

Indeed, Freedom House only rates the nation “partly free.” The group cites voter intimidation, political patronage networks, violent protests, and problems with judicial impartiality and due process. Particularly serious were the threats against press freedom, which led to a rating of “not free” in that area. While NATO’s newer members tend to score lower than “Old Europe,” as Donald Rumsfeld once referred to the original allies, Macedonia is a step further down. Only Turkey, an incipient dictatorship, is worse: it almost certainly would not be considered for membership today.

None of this mattered last week, however. After suffering Trump’s many slings and arrows, alliance members approved an invitation for Skopje to join NATO. Macedonian lawmaker Artan Grubi called it “our dream coming true. We have been in the waiting hall for too long.”

That’s because Macedonia had hoped for an invite back in 2008 at the Bucharest summit, but was blocked by Athens over the name dispute, and has wanted to join ever since. Macedonia’s Defense Minister Radmila Sekerinska said, “With NATO membership, Macedonia becomes part of the most powerful alliance. That enhances both our security and economic prosperity.” Money and status are expected to follow.

But how would this benefit the United States and other NATO members? James Ker-Lindsay at the London School of Economics made the astonishing claim that “opening the way for the country to join NATO would be a big win for the organization at a crucial time when concerns over Russian influence in the Western Balkans are growing in many capitals.” As Skopje goes, so goes Europe? Not likely. If Washington and Moscow are engaged in a new “great game,” it is not a battle for Macedonia.

In fact, Macedonia is a security irrelevancy, destined to require American aid to create the pretense that its military is fit for the transatlantic alliance. Skopje spent just $112 million on its armed forces last year, ahead of only one NATO member, Montenegro. That was barely 1 percent of its GDP, putting Macedonia near the back of the NATO pack.

With an 8,000-man military, one is tempted to ask, why bother? But then one could similarly pose that query to several other NATO members. Skopje’s military is roughly the same size as Albania’s, slightly bigger than Slovenia’s, and about four times the size of Montenegro’s. None will be of much use in a conflict with the only conceivable threat, Russia.

So why bring Macedonia into NATO?

Some American policymakers see alliance membership as a means to socialize nations like Macedonia, helping them move towards democracy. However, the European Union, which sets standards governing a range of domestic policies, has always been better suited to this task, and EU membership imposes no security obligations on Washington. With the name controversy tentatively resolved, Skopje could begin the EU accession process—if the Europeans are willing. That is properly their—not Washington’s—responsibility.

In contrast, the transatlantic alliance should advance American and European security. Absorbing former members of the Warsaw Pact and Soviet Union, thereby pushing the alliance up to the Russian Federation’s border, proved to be a foolish move because it violated assurances made to Russian leaders. Despite being former KGB, Vladimir Putin never appeared to be ideologically antagonistic toward America. However, when he perceived Washington’s behavior as threatening—including dismembering Serbia, backing revolutions in Georgia and Ukraine, and promising to include both nations in NATO—it encouraged him to respond violently.

The Balkans are peripheral even to Europe and matter little to America’s defense. The states and peoples there tend to be more disruptive and less democratic than their neighbors, reflecting the region’s unstable history. (North) Macedonia’s 8,000 troops aren’t likely to be reborn as the Spartan 300 and hold off invading Russians. So why should America threaten war on Skopje’s behalf?

Admitting new members is never costless. Aid will be necessary to improve their militaries. Moreover, newer members sometimes become the most demanding, like the Baltics and Poland, which insist that they are entitled to American bases and garrisons.

Expansion also complicates alliance decision-making. No doubt, Washington wishes its European allies would do what they’re told: spend more, shut up, and deploy where America wants them. That doesn’t work out very well in practice, alas, as Trump has discovered in Europe (though nations with smaller militaries are more likely to acquiesce than nations with bigger ones). An organization of 30 members, which NATO will become if Macedonia is added, is a more complex and less agile creature than one of 16, the number that existed before NATO raced east.

Continuing expansion also reinforces the message that NATO is hostile toward Russia. That’s the only country allies are joining to oppose, after all. Obviously, there are plenty of other reasons Moscow should distrust the United States, but reinforcing negative perceptions for no benefit at all is bad policy.

Finally, expanding the alliance is nonsensical in light of the president’s criticisms of the Europeans. Hiking U.S. military spending, increasing manpower and materiel deployments in Europe, and adding new members all contradict his demand that the allies do more and signal that the president is not serious in his demands. That leaves the Europeans with little incentive to act, especially since most of their peoples perceive few if any security threats.

Yet again President Trump has been exposed as a thoughtless blowhard. His rabid supporters have likely enjoyed his confrontational rhetoric, but he has done nothing to turn it into policy. The Europeans need only wait for his attacks to ebb and then they can proceed much the same as before. The status quo will continue to reign, impervious to change.

Montenegro always resembled the Duchy of Grand Fenwick from the delightful novel The Mouse that Roared. Macedonia is the Duchy of North Grand Fenwick, a slightly larger neighboring state with similar features but additional problems. Neither is remotely relevant to American security. America doesn’t need yet another security black hole as an alliance partner.

Doug Bandow is a senior fellow at the Cato Institute. A former special assistant to President Ronald Reagan, he is author of Foreign Follies: America’s New Global Empire.