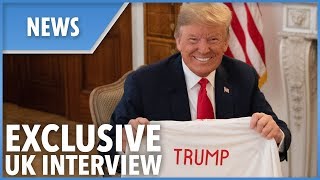 DONALD Trump accuses the PM of wrecking Brexit on the first day of his UK visit — and warns she may have killed off any chance of a vital US trade deal.

The US President delivers his incendiary verdict on her negotiating strategy in a world exclusive interview with The Sun.

In an extraordinary intervention timed to coincide with his UK visit, Mr Trump said Theresa May ignored his advice by opting for a soft Brexit strategy.

And he warned her any attempts to maintain close ties with the EU would make a lucrative US trade deal very unlikely.

For more great videos, pictures and stories please subscribe to the channel and go to thesun.co.uk