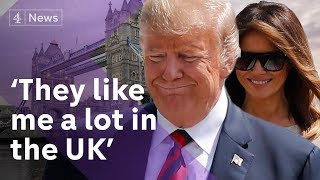 Despite all the mass protests planned for President Donald Trump’s visit to the UK he declared “people like me there.” We analyse his visit, trade, the special relationship and witness the pomp and ceremony.

Welcome to Blenheim Palace where President Trump will touch down for a black tie dinner hosted by Theresa May.

Earlier Mr Trump described the UK as “a pretty hot spot right now with a lot of resignations.”

Mr Trump flew to Britain after a somewhat chaotic 28 hours at the NATO summit in Brussels, where he characteristically claimed victory over his demand for the allies to increase their defence spending.