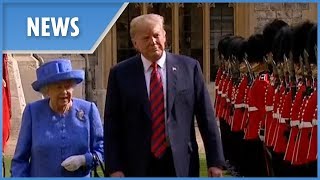 DONALD and Melania Trump have arrived at Windsor Castle this afternoon to have tea with the Queen during his working UK visit.

The US President flew in on Marine One, following his press conference at Chequers with Theresa May.

The President and First Lady were treated to a Guard of Honour on their arrival at the historic royal residence in Berkshire.

They met on the dais in the castle’s Quadrangle, and the US national anthem was played on his arrival.

Formed in 1650, the Coldstream Guards are Britain’s oldest regiment and have served in almost every major conflict since the Civil War.

They took a starring role in last month’s Trooping of the Colour to celebrate the Queen’s birthday and guard Buckingham Palace and Windsor Castle in their distinctive red tunics and bearskin hats. And Her Maj serves as the regiment’s Colonel in Chief.

Earlier today Mr Trump heaped praise on Mrs May, but urged her to make sure that her Brexit deal lets Britain strike a trade agreement with the US – saying, “That’s all that matters.”

Standing next to the Prime Minister today, the President shifted his stance from that in The Sun’s world exclusive interview where he warned a softer Brexit would ‘probably kill’ a US trade deal.

For more great videos, pictures and stories please subscribe to the channel and go to www.thesun.co.uk