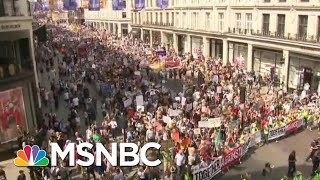 President Donald Trump continues his United Kingdom trip with a visit to Windsor Castle to meet with Queen Elizabeth II, but not without public protests in London.
» Subscribe to MSNBC: http://on.msnbc.com/SubscribeTomsnbc