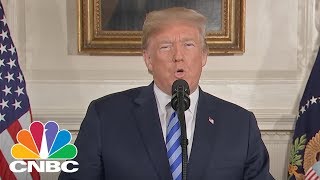 About CNBC: From ‘Wall Street’ to ‘Main Street’ to award winning original documentaries and Reality TV series, CNBC has you covered. Experience special sneak peeks of your favorite shows, exclusive video and more.

President Donald Trump announced on Tuesday he will withdraw the United States from the Iran nuclear deal and restore far-reaching sanctions aimed at severing Iran from the global financial system.

“We will be instituting the highest level of economic sanction,” Trump said. “Any nation that helps Iran in its quest for nuclear weapons could also be strongly sanctioned by the United States.”

The landmark 2015 nuclear agreement lifted sanctions on Iran that crippled its economy and cut its oil exports roughly in half. In exchange for sanctions relief, Iran accepted limits on its nuclear program and allowed international inspectors into its facilities.

Exiting the deal fulfills one of Trump’s campaign promises, but threatens to strain U.S. relations with some of its closest allies and disrupt a significant source of the world’s oil. It also gives Iran the option of expelling inspectors and resuming nuclear activity that it has agreed to suspend.

The Trump Administration will restore all sanctions on Iran suspended under the deal, a broad range of penalties that target Iran’s energy industry, its financial institutions and industrial sectors, its ability to insure domestic businesses and its access to U.S. dollars and commodities.

The Treasury Department is issuing statutory waivers that will allow the United States to wind down various aspects of the deal over 90-day and 180-day periods.

The United States’ outsize influence over the global financial system make its sanctions powerful tools. The Treasury Department can lock foreign businesses out of the U.S. market if they refuse to comply with sanctions on Iran.

Trump has long threatened to scrap the accord, the signature foreign policy achievement of the Obama administration. However, he certified that Iran was complying with the agreement throughout his first year in the Oval Office, reportedly under pressure from the moderate wing of his administration.

Still, the president began the process of unraveling the deal in October, when he told Congress the agreement was no longer in the country’s national security interest. At that point his administration began to push Congress and European allies to reopen negotiations and revise the accord.

When Trump certified Iran’s compliance in January, he warned that it would be the last time unless Washington reached a deal with Europe to toughen the terms of the nuclear agreement. That deal has not materialized ahead of the next deadline on May 12.

“Today’s action sends a critical message,” Trump said. “The United States no longer makes empty threats. When I make promises, I keep them.”

“As we exit the Iran deal, we will be working with our allies to find a real, comprehensive, and lasting solution to the Iranian threat,” Trump added.

Those efforts will target Iran’s ballistic missile program and its role in conflicts throughout the Middle East, according to Trump. Along with those issues, Trump wanted Europe to agree to a deal that would make permanent certain restrictions on Iran’s nuclear program that expire in 10-15 years. He also pushed for more intrusive inspections.

In addition to the United States, Iran negotiated the nuclear deal with China, France, Germany, Russia and the United Kingdom. Those countries, along with the European Union, are trying to preserve the deal, creating the risk of a diplomatic and economic rift with the United States.

“France, Germany, and the UK regret the U.S. decision to leave the JCPOA. The nuclear non-proliferation regime is at stake,” French President Emmanuel Macron said, using the official name of the deal, the Joint Comprehensive Plan of Action.

He added, “We will work collectively on a broader framework, covering nuclear activity, the post-2025 period, ballistic activity, and stability in the Middle-East, notably Syria, Yemen, and Iraq.”

Donald Tusk, president of the European Council, on Tuesday said Trump’s polices will be met with a “European approach” that will be discussed at a summit next week.