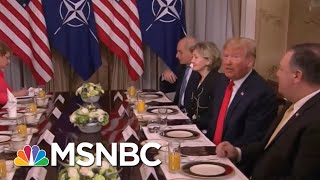 President Trump targeted Germany on Wednesday in reiterating his demand that NATO countries step up their defense spending so that they shoulder a greater share of the burden in protecting Europe from Russia.
» Subscribe to MSNBC: http://on.msnbc.com/SubscribeTomsnbc