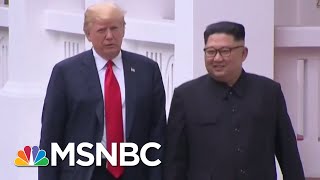 With a smiling Kim Jong Un by his side, President Trump declares the meeting went “better than anybody could have expected” and says, “We’re going right now to a signing.”
» Subscribe to MSNBC: http://on.msnbc.com/SubscribeTomsnbc