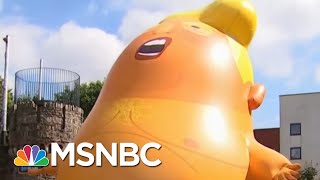 Trump confesses that the baby Trump blimp makes him feel unwelcome in London in an interview with The Sun. Pres. Trump also said Boris Johnson would make a great P.M. ahead of his meeting with current P.M. Theresa May. Eugene Robinson and Brian Klaas discuss the interview with Lawrence.
» Subscribe to MSNBC: http://on.msnbc.com/SubscribeTomsnbc