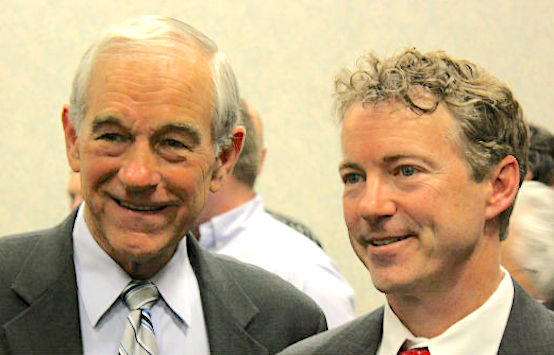 Romney’s Russia warning came at a time when Republicans were eager to exploit President Obama’s hot mic comments to Russian president Dmitri Medvedev where he promised “more flexibility” on missile defense issues after the election. Romney, to the delight of Republican hawks and neoconservatives, was eager to portray Obama as capitulating, weak, and dangerous. For his part, Obama, who once vowed to “reset” U.S.-Russia relations, painted Romney as outdated for disparaging diplomacy.

But that was then. This week the Cold War seemed to be back in full force for many former Obama supporters, as President Trump met with Russian President Vladimir Putin in the wake of 12 Russian agents being indicted for allegedly meddling in the 2016 election.

Democrats have joined forces with Republican hawks and neoconservatives to declare Trump “weak” for engaging Russia. One MSNBC pundit said Trump’s NATO criticisms were the president “doing Vladimir Putin’s bidding.” New York Magazine’s Jonathan Chait went full Alex Jones when he suggested that Trump may have been a Putin agent since 1987—a Manchurian Candidate-esque spin reminiscent of the original Red Scare. #TraitorTrump even trended on Twitter.

In the midst of this hysteria, Senator Rand Paul was asked by CNN’s Jake Tapper on Sunday whether he thought Trump should demand that Putin acknowledge Russia’s meddling.

“They’re not going to admit it in the same way we’re not going to admit that we were involved in the Ukrainian elections or the Russian election,” Paul replied. “So all countries that can spy do. All countries that want to interfere in elections and have the ability to, they try.” Paul insisted that U.S. and Russian meddling are not “morally equivalent,” but said we must still take into account that both nations do this.

“Rand Paul is on TV delivering line after line of Kremlin narrative, and it is absolutely stunning to watch,” read one tweet with nearly 5,000 likes. Another tweet, just as popular, said, “Between McConnell hiding election interference and Rand Paul defending it, looks like Russia’s already annexed Kentucky.” A Raw Story headline on Paul’s CNN interview read, “Stunned Jake Tapper explains why NATO exists to a Russia-defending Rand Paul.”

But was Paul really “defending” Russia? Was he even defending Russian meddling in U.S. elections? Or was he merely trying to pierce through the hysteria and portray American-Russian relations in a more accurate and comprehensive context—something partisans left and right won’t do and the mainstream media is too lazy to attempt?

Cutting through the crap on foreign policy is something of a Paul family tradition.

When Ron Paul suggested on a Republican presidential primary debate stage in 2008 that U.S. foreign policy created “blowback” that led to 9/11, fellow GOP candidate Rudy Giuliani accused Paul of blaming America and defending the attackers. Paul didn’t relent: “Have you ever read about the reasons they attacked us? They attack us because we’ve been over there. We’ve been bombing Iraq for 10 years.”

No one in the GOP wanted to hear what Ron Paul had to say because it challenged and largely rebutted Republicans’ entire political identity at the time. Paul was roundly denounced. FrontPageMag’s David Horowitz called him a “disgrace.” RedState banned all Paul supporters. The American Conservative’s Jim Antle would recall in 2012: “The optics were poor: a little-known congressman was standing against the GOP frontrunner on an issue where 90 percent of the party likely disagreed with him…. Support for the war was not only nearly unanimous within the GOP, but bipartisan.”

There are neocons in both parties who still want Ukraine and Georgia to be in NATO. That’s very, very provocative. It has stimulated and encouraged nationalism in Russia. George Kennan predicted this in 1998 when we still had Yeltsin and Russia was coming in our direction. He said, “If you push NATO up against Russia’s borders, nationalism will arise and their militarist tendencies will increase, and you may get someone like a Putin,” basically.

Do you think Jake Tapper Googled “George Kennan”? That’s about as likely as Giuliani Googling “blowback.”

“It’s a big mistake for us, not to say that we’re morally equivalent or that anything Russia does is justified,” Paul told Tapper. “But if we don’t understand that everything we do has a reaction, we’re not going to be very good at understanding and trying to have peace in our world.”

As for Russian spying—was Paul just blindly defending that, too? Or did he make an important point in noting both sides do it?

“Most Americans are understandably shocked by what they view as an unprecedented attack on our political system,” the New York Times reported in February. “But intelligence veterans, and scholars who have studied covert operations, have a different, and quite revealing, view.”

The Times continued: “’If you ask an intelligence officer, did the Russians break the rules or do something bizarre, the answer is no, not at all,’ said Steven L. Hall, who retired in 2015 after 30 years at the C.I.A., where he was the chief of Russian operations. The United States ‘absolutely’ has carried out such election influence operations historically, he said, ‘and I hope we keep doing it.’”

The U.S. will no doubt keep meddling in foreign elections. Russia will do the same, just as it did during the Obama administration and years prior. The cries against diplomacy and for war will ebb, flow, flip, and flop, depending on who sits in the White House and how it makes the screaming partisans feel. Many Democrats who view Trump’s diplomacy with Russia as dangerous would have embraced it (and did) under Obama. Many Republicans who hail Trump’s diplomatic efforts wouldn’t have done so were he a Democrat. President Hillary Clinton could be having the same meeting with Putin and most Democrats would be fine with it, Russian meddling or no meddling.

So many headlines attempted to portray Paul as the partisan hack on Sunday when the opposite is actually true. It’s the left, including much of the media, that’s now turned hawkish towards Russia for largely partisan reasons, while Paul was making the same realist foreign policy arguments regarding NATO and U.S.-Russia relations long before the Trump presidency.

Responding to Romney’s anti-Russia, anti-Obama comments in 2012, Thomas de Waal, a Russia expert at the Carnegie Endowment for International Peace, told the New York Times, “There’s a whole school of thought that Russia is one you need to work with to solve other problems in the world, rather than being the problem.” Rand Paul said Sunday, “People need to think through these things before they get so eager to rattle their sabers about wanting to have a confrontation with Russia.”