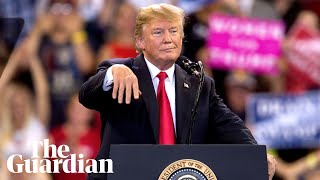 Donald Trump takes aim at protester at a rally in Duluth, Minnesota, saying ‘he’s going home to his mom.’ The president goes on to predict the media will report that there were massive protests at the rally. He briefly mentions his executive order to keep detained families together but says the tough stance on immigration would remain. He blames the Democrats for the immigration problems, claiming they do not care about the effects of uncontrolled immigration