There is No Tomorrow Without the West’s Heroes and Myths 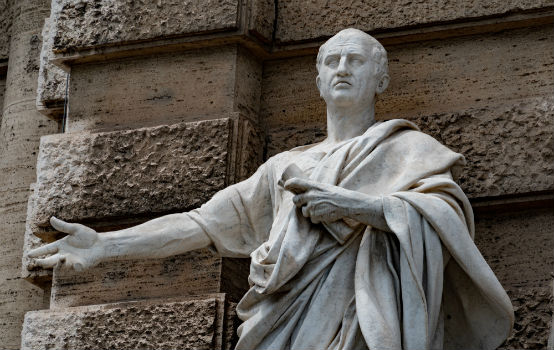 The West is undoubtedly the greatest civilization of all time, the proof of which is in its fruits. From the Nocturnes of Chopin to the Meditations of Marcus Aurelius, the contributions of Westerners have been innumerable. Presently, the value of the West is the subject of vicious debate between a political Right that champions it and a postmodern Left that undermines it, the former seeing only virtue, and the latter seeing only vice. Yet their arguments at times ring hollow. Why? Because assessing the fruits of the West is easier than imagining the structure that grew them, one that rests on the pillars of the historical traditions of Jerusalem, of Rome, and of Myth.

The first pillar, that of Judeo-Christian theology, tells us what we should be. The image of Christ’s sacrifice presents to us an ideal of love and guides us towards individual salvation. It provides a roadmap from hell to heaven (whether personal and temporal or spiritual and in the afterlife is down to the individual reader to decide). It provides a code of good and evil against which to judge our actions. Most importantly, it gives us a connection to the objective truth of God. This higher ideal to which we must aspire drives us towards personal betterment. The Judeo-Christian tradition reminds us that it is possible and rewarding to strive above ourselves.

The second pillar of Greco-Roman secular thought demonstrates what we must be—or, put more prosaically, how we must structure our society such that we neither bend to the tyrannical nor rip each other apart in some Hobbesian bacchanalia. The Greeks and Romans largely structured their societies in ways we would recognize today. The executive power sat with the Consuls and the legislative with the Senate. The state was not a theocracy, and there existed a forum distinct from both government and religious authority. In Athens, issues that were freely discussed were also voted upon, with each individual free to cast his ballot however he saw fit. It is not hard to see how the institutions of the United States, for instance, were born in the halls of the Parthenon and on the streets of Capitoline Hill.

The Greeks and Romans provided not just the governmental, but the intellectual foundation upon which much of Western thought rests. Alfred North Whitehead said that “the safest characterization of the European philosophical tradition is that it consists of a series of footnotes to Plato,” and anyone who has read The Republic would be hard-pressed to argue against this. To this day, there is no more perfect depiction of the Western intellect than at the center of the painting “The School of Athens,” where Plato and Aristotle stand in argument. The former points to the sky, the latter to the earth, in eternal debate over whether reality is most accurately represented by non-physical concepts or empirical particulars.

While Rome and Jerusalem provide guidance for what we should be, they do not explicitly make clear what we, as Westerners, actually are. Rome and Greece show us how to think and structure society; Christ tells us how to connect with God and rise above our earthly nature. And without them both, what would we be? If Christ had never come and Athens had never existed, what would we have become?

The answer can partially be found in biblical texts. The idea that we are made in God’s image yet cursed with original sin captures the conflicted nature of humanity. But these stories are more akin to Christian myths than anything else. Calling them myths is not to cast aspersions on them, but rather to accurately frame them as distinct from later stories in the Bible. We can surmise, for instance, that at least a significant part of the gospels actually happened, regardless of whether we have personal faith. However, the same cannot be said of Genesis. That is not to say it is lesser, but that it is more akin to myth: its factual accuracy is debatable, but its truth is still valid.

In this way, the Bible joins the third pillar on which Western Civilization rests, alongside the Iliad, the Odyssey, Beowulf, and others. It is here that we see how legends make implicit statements on the truth of man’s nature, and through the confusion and the conflict therein reveal ourselves to us. Consider these passages from the Iliad, an address by Hector to his wife and son after he has returned from battle:

“Wife, I too have thought upon all this, but with what face should I look upon the Trojans, men or women, if I shirked battle like a coward? I cannot do so: I know nothing save to fight bravely in the forefront of the Trojan host and win renown alike for my father and myself….”

He stretched his arms towards his child, but the boy cried and nestled in his nurse’s bosom, scared at the sight of his father’s armor…. His father and mother laughed to see him, but Hector took the helmet from his head and laid it all gleaming upon the ground. Then he took his darling child, kissed him, and dangled him in his arms, praying over him the while to Jove and to all the gods. “Jove,” he cried, “grant that this my child may be even as myself, chief among the Trojans; let him be not less excellent in strength, and let him rule Ilius with his might. Then may one say of him as he comes from battle, ‘The son is far better than the father.’”

Hector is both weak and strong, terrified and brave, melancholic and hopeful, despondent and defiant, monster and man. If there exists a clearer passage illustrating the conflict that defines our nature, I do not know it.

Western civilization is not some archaic faceless entity that exists out in the ether. It is a pool of memories that impacts the lives of those who access them, providing them with sustenance. One of Jung’s most interesting ideas is a layer of the mind referred to as the collective subconscious. This refers to the shared memories that implicitly influence the way we think and act. It is the reason you don’t need to be an expert on military tactics in the late Roman Republic to know what “Crossing the Rubicon” means, nor do you need to be a biblical scholar to understand “the forbidden fruit.” The memories of the Western collective subconscious can be drawn upon by every Westerner, and it is this psychological connection with the past that has enabled the West to build its civilization. Sheridan could draw upon the memory of Shakespeare, who could draw upon the memory of Aristophanes. And if the memories in each layer can be drawn upon, they can also be added to by those alive today.

That being said, Western civilization is in need of rejuvenation, as many in the West are renouncing the virtues of their own past. There wouldn’t have been a today without some of the heroes that have been mentioned, and there won’t be a tomorrow without them rising anew. Perhaps there are Caesars and Alexanders yet to march. Perhaps there are Ciceros and Catos left to write. Perhaps there are Hectors and Beowulfs left to act. Perhaps what once was may yet come to pass. Perhaps.

Dylan Stevenson is a recent graduate in history and economics from the University of Notre Dame, having previously attended Harrow School in England, the country of his birth. He is presently working as a banking analyst in New York.