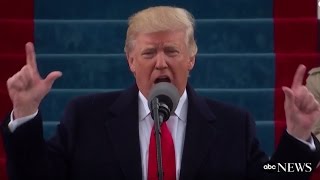 President Trump Inauguration Address | The 45th president of the United States speaks outside the Capitol building on Inauguration Day. During his inaugural address, Trump told the American people that this was “their celebration.”He echoed themes that were repeated throughout his campaign, promising not to leave “the forgotten men and women” behind, and calling for a return of power to the people as opposed to politicians in Washington.