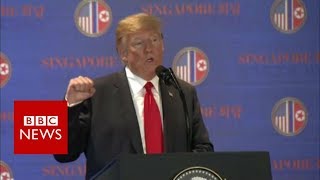 This detail is not in the joint declaration because the two leaders agreed it after the document was created, he says.
“We can replace the horrors of battle with the blessings of peace,” Trump continues.

“There’s no limit to what North Korea can achieve when it gives up its nuclear weapons,” he says.

He says the rest of the world “really wants to engage with North Korea”.

Kim could be “remembered as the leader who ushers in a new era of prosperity for his people”, he says.