Yes, We Should Call Them Imperialists 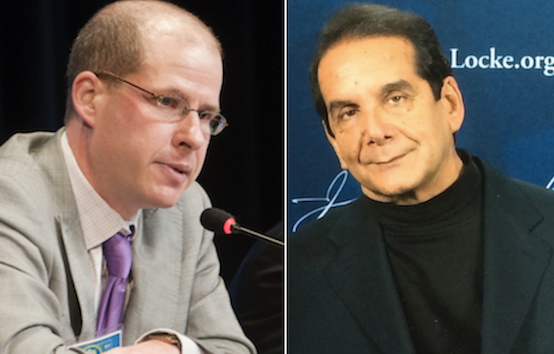 Recently while reading a book by an Israeli scholar named Yoram Hazony with the provocative title The Virtue of Nationalism, I encountered a distinction drawn by the late Charles Krauthammer between empire building and American global democratic hegemony. Like the editors of the Weekly Standard, for which he periodically wrote, Krauthammer believed it was unfair to describe what he wanted to see done, which was having the U.S. actively spread its own form of government throughout the world, as “imperialism.” After all, Krauthammer said, he and those who think like him “do not hunger for new territory,” which makes it wrong to accuse them of “imperialism.”

Hazony responds with the obvious answer that control can be imposed on the unwilling even if the empire builders are not overtly annexing territory. Meanwhile, other neoconservatives have given the game away by pushing their imperialist position a bit further than Krauthammer’s. Max Boot, for example, has been quite open in demanding “an American empire” built on ideological and military control even without outright annexation.

The question that occurred to me while reading Krauthammer’s proposal and Hazony’s response (which I suspect would have been more devastating had Hazony not been afraid of losing neoconservative friends and sponsors) is this one: how is this not imperialism?

Certainly the use of protectorates to increase the influence of Western powers in the non-Western world goes back a long time. As far back as the Peloponnesian War, rival Greek city-states tried to impose their constitutional arrangements on weaker Greek societies as a way of managing them politically. According to Xenophon, when the Athenians then surrendered to the Spartan commander Lysander in 403 BC, they had two conditions imposed on them: taking down their great wall (kathairein ta makra teixe) and installing a regime that looked like the Spartan one. Thus is arguing that territory has to be annexed outright in order for it to become part of an American empire so utterly unconvincing.

One reason the views offered by Krauthammer and Boot did not elicit more widespread criticism—and have enjoyed enthusiastic favor among Republicans for decades, culminating in the oratorical wonders of George W. Bush—may have been the embrace of another neoconservative doctrine: “American exceptionalism.” The belief that the U.S. is a supremely good nation founded on universal principles has consequences that go well beyond electoral politics. Dennis Prager, a nationally syndicated talk radio host and co-owner of the website Townhall.com, extols American exceptionalism, which he says springs from American values.

Those values have “universal applicability,” according to Prager, and are “eminently exportable.” Glenn Beck has taken up the same theme of “American exceptionalism” as an exportable “idea” that is meant for everyone on the planet. The “ideas” or “values” in question are variously defined by the neoconservative media as “human rights,” “universal equality,” or just making sure everyone lives like us. Whatever it is, we are told that to withhold it from the rest of the human race would be uncharitable. Our efforts to bring it to others therefore cannot be dismissed as “imperialism” any more than the Spanish government of the 16th century thought it was doing wrong by forcing its religion on indigenous people in the Americas.

Although I’m hardly a fan of his political views, former president Barack Obama once said something that I thought was self-evident but that offended even members of his own party. According to Obama, “Americans believe they’re exceptional. But the Brits and Greeks believe they’re special too.” Obama was merely observing that it’s okay for others to believe they’re special, even if they’re not Americans imbued with “the idea.” Yet his statement was received with such uproar that he felt compelled to backtrack. Speaking later at West Point, he made it clear that “I believe in American exceptionalism with every fiber of my being.” This from someone whom Fox News assures us hated America and spent every minute of his presidency denying our greatness! (And, yes, I’ve heard the rejoinder to this: Obama was only pretending to believe in the creed he dutifully recited.)

It might be argued (and has been by neoconservatives many times) that the U.S. is both morally superior and less dangerous than ethnically defined societies because we advocate a “value” or “creed” that’s accessible to the entire human race. But this is hardly a recipe for peace as opposed to what Krauthammer called a “value-driven” relationship with the rest of the world. Australian journalist Douglas Murray, in his intended encomium Neoconservatism: Why We Need It, tries to praise his subjects but ends up describing a kind of global democratic jihadism. While Douglas admits that “socially, economically, and philosophically” neoconservatism differs from traditional conservatism, he insists that it’s something better. He commends neoconservatives for wishing to convert the world to “values.” Their primary goal, according to Murray, is the “erasing [of] tyrannies and [the] spreading [of] democracy,” an arduous task that requires “interventionism, nation-building, and many of the other difficulties that had long concerned traditional conservatives.”

Please tell me this is not what it obviously is: an invitation to war and empire building. The quest for hegemony always looks the same, no matter what moral labels some choose to give it.