Remember the Reuters poll from two weeks ago showing the same thing? Seemed like an outlier at the time, possibly triggered by the “abolish ICE” push that got so much attention in righty media. Per Gallup’s new numbers, it’s not an outlier.

The question now is how durable this is. Yesterday’s House vote on a resolution of support for ICE is probably the last legislative action we’ll see on the topic this year. There’s been enough poor polling on the idea of abolishing ICE for Pelosi and Schumer to tell members of their caucus to keep their yappers shut about it going forward unless it’s of special appeal in their home districts. As “abolish ICE” fades among Dems, it’s destined to fade among Republicans too. Or is it?

Bear in mind as you absorb this data that, for a hot week or two, it looked like immigration might be more galvanizing for Democrats than for Republicans. The media was completely saturated with coverage of Trump’s child separation policy; the public was heavily opposed to it; even today there are stories being written about the fallout from it. Instead it’s GOPers who have seized upon immigration. Which leaves me wondering about two things. One: What would the numbers be like if Trump hadn’t uncharacteristically reversed course? And two: Are we sure Republican interest in immigration as a midterm issue is a backlash to the “abolish ICE” push? What if it’s a backlash to the backlash against Trump’s child separation policy? 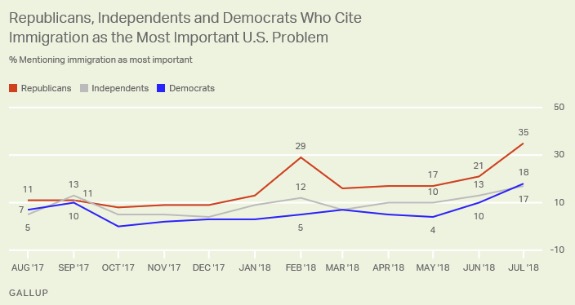 As you can see, the share who say immigration is the country’s top issue is up sharply among both parties recently. Overall, it stands at 22 percent across the population. How unusual is that? Follow the link up top to Gallup’s article and you’ll find that it’s the largest share this century thus far. Never before has the number reached 20 percent. The closest previous mark was 19 percent in 2006, when Congress got close to passing comprehensive immigration reform under Bush. It spiked again in 2014 at 17 percent with the border crisis of unaccompanied child illegals under Obama. If you’re looking for harbingers of surprisingly high Republican turnout this fall, there you go. Immigration has the Republican engine revving.

Maybe. Or it may be that interest in immigration is spiking among exactly the sort of populist Trump fans who’d be at the polls anyway this fall to try to punish POTUS’s enemies. Here’s an ominous historical snapshot from elections analyst Bruce Mehlman. Note how net presidential job approval does — and doesn’t — track with midterm gains and losses: 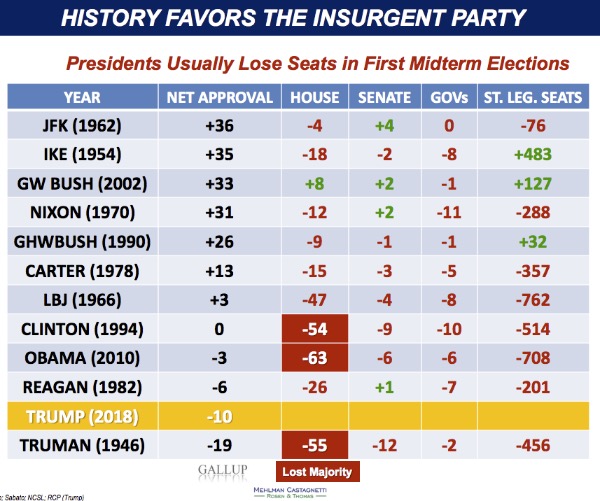 Going all the way back to Harry Truman, literally every first-term president save one has lost House seats in the midterm. The lone exception was Dubya, whose job approval was temporarily upwards of 90 percent due to 9/11. Not every president loses a House majority, of course, even if their party’s busy shedding seats, but that’s where job approval comes in. Every president whose net approval has been less than double digits has lost a minimum — a minimum — of 26 seats. That was Reagan, and Reagan actually did remarkably well under the circumstances compared to other presidents. Typically a president with weak approval will lose in the neighborhood of 45-60 seats.

Trump’s net approval right now is -9 in the RCP average and -10 in Mehlman’s data. If historical trends hold, immigration or no immigration, it’ll be a bloodbath in November. Getting crushed in the House but holding the Senate thanks to an extremely favorable map will be considered a moral victory.