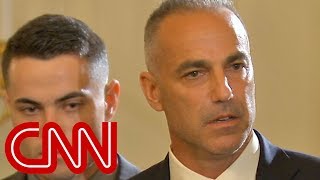 President Donald Trump heard a series of heartfelt stories and pleas for change during a meeting Wednesday with people affected by some of the nation’s highest-profile deadly school shootings, including the 1999 Columbine High School shooting, the 2012 Sandy Hook Elementary School massacre and last week’s shooting at Marjory Stoneman Douglas High School in Parkland, Florida.
Andrew Pollack, a father of one of the 17 victims who died in last week’s Florida shooting, said he was speaking Wednesday because his daughter couldn’t.
“We as a country failed our children,” he said. “This shouldn’t happen.”
He asked how it was that America could protect its airports, its concerts, its embassies and even the elevators at the Department of Education, but not its schools.
“How many schools, how many children have to get shot? It stops here with this administration and me. I’m not going to sleep until it is fixed. And Mr. President, we’ll fix it. Because I’m going to fix it. I’m not going to rest,” he said.
“My beautiful daughter, I’m never going to see her again. It’s simple. Let’s fix it,” he said.