NYT’s Stephens Demands Bolton, Pompeo Resign for the Good of the Constitution, Stick It to Trump 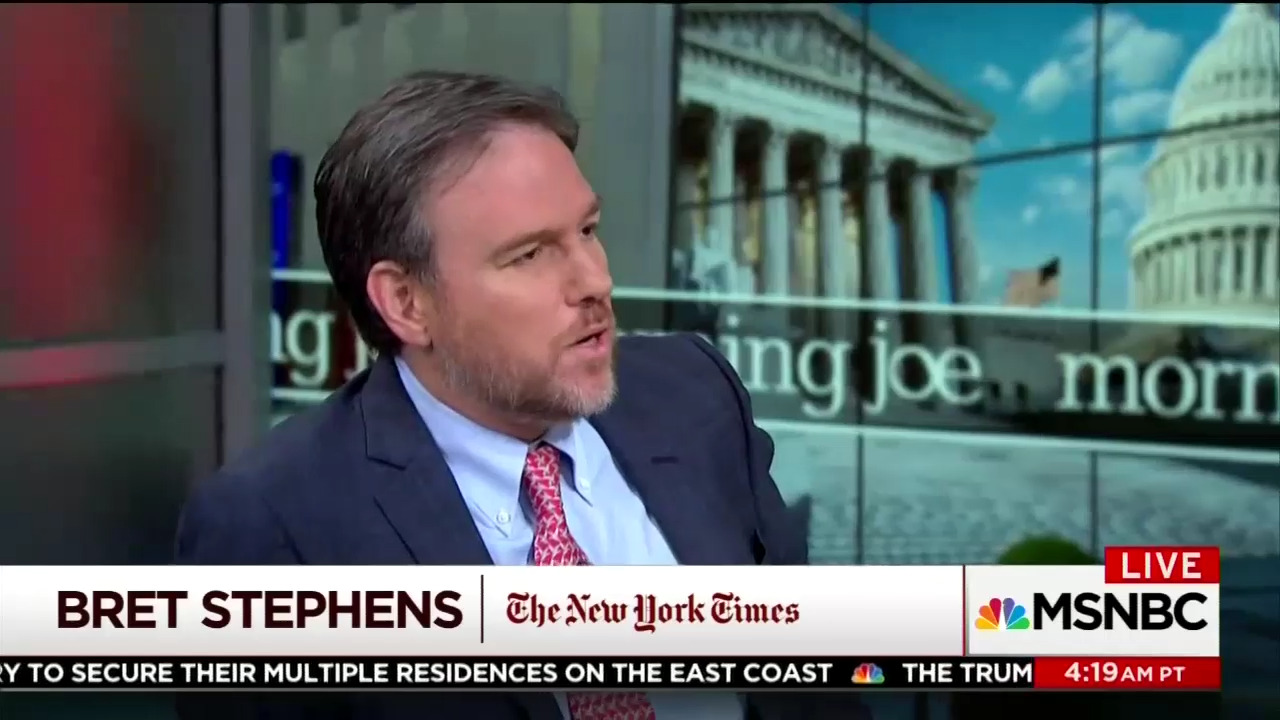 In an item posted Thursday (presumably in advance of its usual Saturday print spot), New York Times columnist Bret Stephens demanded that National Security Adviser John Bolton and Secretary of State Mike Pompeo resign for the good of “the Constitution,” “the country,” and “their conscience” in light of the President’s less-than-stellar performance in Helsinki.

“Assuming Mike Pompeo and John Bolton still have their own senses intact, they too should resign following the epic disgrace of the U.S.-Russia summit in Helsinki on Monday. So should their senior staff,” Stephens declared.

Stephens assured readers that he doesn’t “suggest this lightly” because he’s “known both men for years, respect them, and wrote friendly columns when they took their current jobs” plus holds many of the same views.

Showing just how much of this is about his personal disdain for Trump, Stephens quipped that whomever would succeed either man “could very well be worse”: “Secretary of State Newt Gingrich? National Security Adviser Sebastian Gorka? Why not? For an administration whose core values are personal toadyism and ethical elasticity, they’d be perfect.”

He then continued (emphasis mine and click “expand” to read more):

Yet those considerations do not relieve Pompeo, Bolton and their staff of three higher duties: the Constitution, to which they swore an oath; the country, to which they pledge allegiance; and their conscience, to which they ultimately must account. Let’s take each in its turn.

The Constitution. No, Donald Trump is not guilty of “treason,” a word that’s been bandied about much too loosely this week. Treason is narrowly defined in the Constitution for a good reason, and its promiscuous misuse only helps the president’s defenders paint opponents as hysterics and ignoramuses.

Trump’s behavior in Helsinki is, however, another vivid reminder of his manifest unfitness for office.

The president’s pathetic suggestion on Tuesday that he misspoke by failing to use a double negative also reminds that, knave or fool, he’s  a congenital liar.

By continuing to serve the president, Pompeo and Bolton and their top aides are not — as they doubtlessly tell themselves in humiliating moments like this one — cleaning up after him. They are covering up for him.

The country. In 2016, Bolton denounced Trump’s penny-wise approach to NATO for “encouraging Russian aggression.” Last year, he wrote that Russian interference in the U.S. election was “a true act of war,” and that Putin’s denials were “insulting.” This was in a newspaper op-ed titled, in part, “Negotiate with Russia at our peril.”

Those views remain true. Russia is a hostile power seeking, as Pompeo told me last year in a public interview, “to stick it to America.”

Well, at least he said that Trump isn’t guilty of treason. That’s an improvement over what his fellow media colleagues and like-minded anti-Trump Republicans have been saying this week.

Stephens also ruled that “Bolton and Pomepo should be leading the conservative charge against the Putin appeasers,” but based on the President’s actions, both men “are effectively complicit with them.”

After laying out the conscience argument, he concluded that both men have been “either violating their principles, or had none to begin with.”

Therefore, their resignations would allow them to “preserve their honor.” But considering the dominant theme in the liberal media that the President is a madman and possible Russian agent, one would think that it’d behoove both men to stay for the good of the country.

But what do we know!