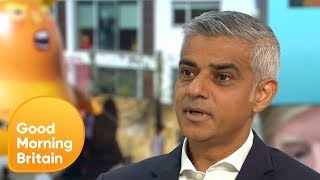 Thousands of people are expected to protest President Donald Trump’s official visit to the UK this week. Mayor of London Sadiq Khan has given permission for a large ‘angry baby’ ballon of Trump to fly over London at the protest which has been criticized.
Subscribe now for more! http://bit.ly/1NbomQa

The Good Morning Britain YouTube channel delivers you the news that you’re waking up to in the morning. From exclusive interviews with some of the biggest names in politics and showbiz to heartwarming human interest stories and unmissable watch again moments.