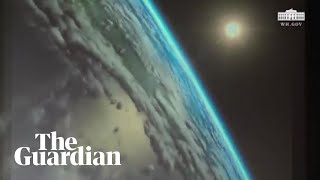 Reporters were shown a video ahead of Donald Trump’s press conference in Singapore, which the US president said he had played it to Kim Jong-un and his aides toward the end of their talks. It was made by Destiny Productions and was presented in Korean and English in the style of an action movie trailer
Subscribe to Guardian News ► http://bit.ly/guardianwiressub