Trump: Let’s turn the China-tariff knob all the way up to $500 billion 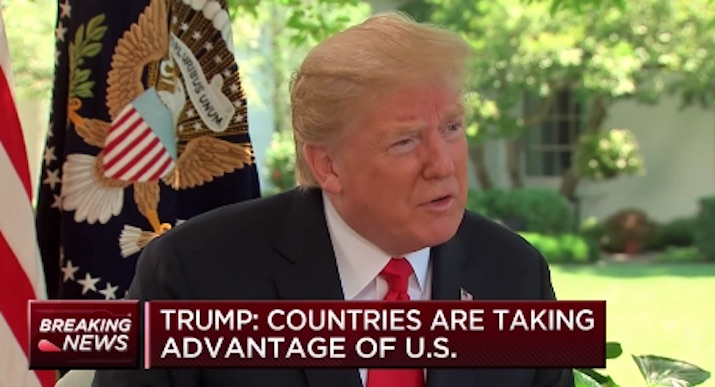 Does anyone ever win a trade war? No, but there are degrees of losing one, and Donald Trump wants to make sure China loses worse than we do. In an interview with CNBC this morning, Trump notes that he could have a great stock-market boom if he simply ignored the trade deficits and cheating conducted by Beijing as his predecessors did, but he wants to fix this problem rather than kicking it down the road.

How will he fix it? By slapping tariffs on every good and service imported from China if need be — all $505 billion of them:

Trump weighs in on the trade war with China from CNBC.

President Donald Trump has indicated that he is willing to slap tariffs on every Chinese good imported to the U.S. should the need arise.

By sheer dollar volume, the Chinese won’t be able to come close to the U.S. in a tit-for-tat battle. Trump’s comments point to a willingness to push the envelope as far as the U.S. needs to get Chinese tariff concessions, along with a pledge to stop stealing American technology.

“I’m not doing this for politics, I’m doing this to do the right thing for our country,” Trump said. “We have been ripped off by China for a long time.”

Trump’s comments on the stock market were predictably prescient. Traders around the world pulled back at Trump’s threat:

World stock markets fell sharply Friday after U.S. President Donald Trump said he was prepared to put new tariffs on all Chinese imports, escalating the rhetoric in a trade war that could hit global economic growth.

TRUMP TALK: Trump told the TV channel CNBC he was ready to exchange tariffs with China until all of China’s exports to the U.S. — worth over $500 billion a year — are hit. “I’m ready to go to 500,” he said. Asked if he would do it even at a cost of a stock market drop, he said: “If it does it does.”

Well, it does, and it will, depending on how long China goes before throwing in the towel. Trump has $200 billion in tariffs ready to roll out soon, which will hit high-tech companies hardest. That already would far outstrip the amount that China imports from the US at $129 billion — one of the issues that Trump wants fixed. This new threat comes as analysts predict China will retaliate in other ways, such as increased regulatory harassment of US companies, Treasury sell-offs, or perhaps even worse:

They include action against U.S. companies operating in China such as boycotts against Apple or Google parent Alphabet, currency devaluation, selling U.S. assets, Treasurys in particular, and changes on geopolitical issues, such as easing sanctions on North Korea.

Each poses certain obstacles — action against U.S. companies could run afoul of World Trade Organization rules, currency devaluation would counteract ambitious measures the government has taken to stabilize the yuan, and selling U.S. bonds or easing North Korean sanctions might not have much impact dollar-wise.

Indeed, on the latter points China has cut its Treasurys holdings 10.2 percent since the peak in late 2013 but still is the global leader with $1.18 trillion on the books. Should China or others around the world continue to reduce their purchases of government debt, the U.S. is hoping that pension funds, insurance companies and private investors step into the void.

China isn’t participating in North Korea sanctions out of the goodness of its heart, though, especially these days. They’re doing so in order to prevent a war on the Korean Peninsula, which looked liked a distinct possibility a few months ago. As for the other options, those also have a cutting-off-nose-to-spite-face quality to them, although for that matter so do tariffs. The US can sustain those reprisals longer than China, or so Trump thinks.

All of this would be more effective had Trump focused this wrath on China alone. Right now, though, Trump’s trade wars with NAFTA and EU partners are likely to give China other options for trade long enough to try and outlast Trump. This might go on for a long, long time, and the higher prices American consumers will pay in the meantime will shortly erode the gains they have seen from Trump’s economic moves over the last 18 months. That may be why Trump’s explicitly threatening to penalize China’s entire export output to the US — to get them to capitulate quickly and sign off on a deal both sides can live with.

That’d give Trump a win right before the midterms, but it’s a big gamble. China can read a calendar too, and they can wait it out to squeeze Trump for better terms. Neither side will end up winning, but they can try their best to make the other side lose worse.