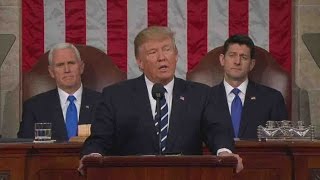 President Donald Trump kicked off his speech to a joint session of Congress Tuesday night by condemning acts of hate. He also spoke optimistically about the future of the country. United States (U.S.) President Donald Trump while addressing a joint session of Congress condemned the recent Kansas Bar shooting and said that U.S. condemned hate in all its ugly forms. Elaborating on the same, the U.S. President said that threats targeting Jewish centres have also emerged and he has asked the Justice Department to form a Task Force on reducing violent crime.
——————————————————————————–
Subscribe to our channel: http://read.ht/fLZ