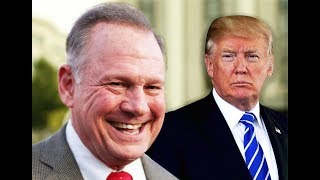 Republicans are cool with being the pedo party going forward. Cenk Uygur and Ana Kasparian, hosts of The Young Turks, discuss. Tell us what you think in the comment section below.

“President Donald Trump gave embattled GOP Senate candidate Roy Moore a vigorous formal endorsement Monday, looking past allegations of sexual misconduct with Alabama teenagers as Republican leaders in Washington, once appalled by Moore’s candidacy, began to come to grips with the ever-clearer possibility of his victory.

Buoyed by the taste of his own success in Congress as the Republican tax bill inches closer to passage, Trump telephoned Moore to offer encouragement as well as support and also argued in a pair of tweets that Moore’s vote was badly needed to push the president’s policies forward.’”*

Download audio and video of the full two hour show on-demand + the members-only post game show by becoming a member at https://goo.gl/v8E64M. Your membership supports the day to day operations and is vital for our continued success and growth.