Trump Will Do ANYTHING To Get Back At Obama 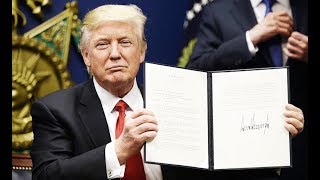 Is Trump signing executive orders purely out of spite for Obama? Ana Kasparian, Michael Shure, and Mark Thompson, hosts of The Young Turks, discuss. Tell us what you think in the comment section below. http://www.tytnetwork.com/join

“The travel ban is back.

The Trump administration said it will begin enforcing the ban at 8 p.m. ET. The move comes less than a week after the U.S. Supreme Court narrowed a series of injunctions by lower federal courts blocking the government from imposing the ban’s two key provisions: a 90-day freeze on visa applications from Iran, Libya, Somalia, Sudan, Syria, and Yemen, and a 120-day suspension of the U.S. Refugee Admissions Program.”*

Download audio and video of the full two hour show on-demand + the members-only post game show by becoming a member at http://www.tytnetwork.com/join/. Your membership supports the day to day operations and is vital for our continued success and growth.