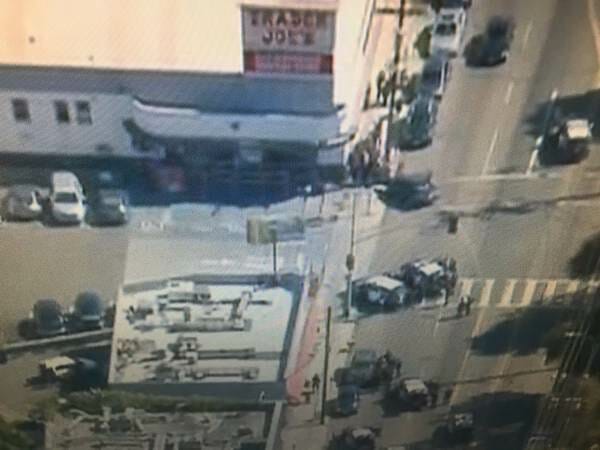 A shooting suspect is barricaded inside of a Trader Joe’s in Los Angeles, possibly with hostages.

According to the Los Angeles Police Dept., a the man who shot his grandmother and girlfriend in South L.A. around 1:30 p.m. and fled in a 2015 Toyota Camry.

He was then  involved in a police pursuit, during which he allegedly shot at officers. No officers were injured.

He ended up in Silver Lake, where he crashed outside the Trader Joe’s located at 2738 Hyperion Ave. before entering the store.

Some people were able to get out, but the suspect remained inside with others as of 4:45 p.m.

The area was surrounded by numerous police cruisers.

UPDATE: We can confirm that there is an active barricaded suspect within a #TraderJoes in #Silverlake. An active tac-alert has been declared to ensure all resources necessary will be available. Please continue to stay clear of the area.

A Trader Joe’s worker dragged out a person after shots were fired.

This is a breaking story. Please refresh page for updates.