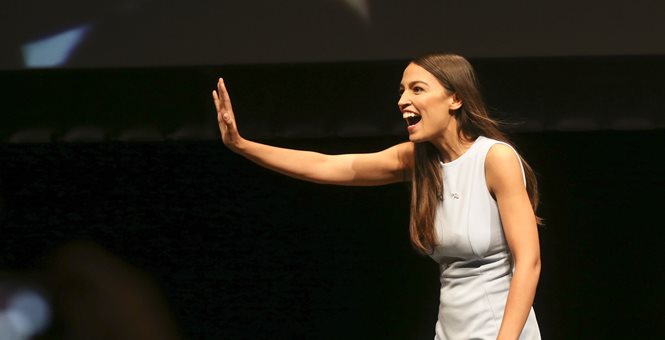 It’s a special day on the Sunday shows when socialism’s new superstar drops by to show off her intellectual chops.

Socialist Alexandria Ocasio-Cortez says that with Bernie Sanders’ help, they’re going to “flip this seat ****RED**** in November” instead of saying “blue.”

It’s like she’s trying to embarrass herself as many times as possible in one week… pic.twitter.com/tiiSpWWenK

She’ll be on “Face the Nation” along with her idol, Bernie Sanders, as they campaign together in Kansas for a progressive Democrat running for Mike Pompeo’s old House seat. Why they’re wasting their time there, I have no idea: It’s a R+15 district. Presumably the idea is to draw big crowds so that other socialist candidates across the country can point to it and say, “See? Even in the heartland they want hard-leftism.”

Otherwise it’s likely to be wall-to-wall chatter about Trump and Putin today. Adam Schiff will be the lead guest on “This Week,” where he’ll say Adam-Schiff-type things about collusion and kompromat. The top-billed Republican, meanwhile, is Marco Rubio, who took some heat this week after claiming that he was satisfied with POTUS’s “I said ‘would’ when I meant to say ‘wouldn’t’” walkback of the Putin press conference. He’ll sit down with “Face the Nation” and “State of the Union” for some “Are you serious?” questions and will also likely be pressed on Trump’s commitment to NATO. Rubio’s a hawk of almost McCain-ian proportions, but unlike McCain he has a long career ahead of him potentially and therefore needs to stay on Trump’s good side. He’ll do his best this morning to be diplomatic with his criticism of the president’s NATO skepticism.

If you can stand it, John Kerry will also be on “Face the Nation” to condemn Trump for not showing as much strength towards an enemy as Kerry himself did with, er, Iran. The full line-up is at the AP.