Colbert's Cartoon Bill Clinton Admits: 'I Should Be in Jail' 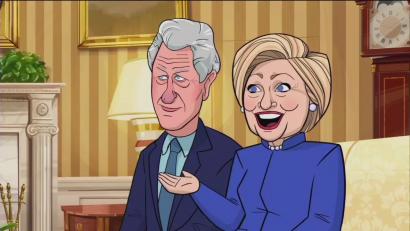 From gags like President Donald Trump being beckoned to the situation room with promises of doughnut crumbs to Vladimir Putin's declaration that the Helsinki Summit was "a vibrant conversation of me telling him exactly what to say and do," Stephen Colbert's animated Showtime series Our Cartoon President, is a sophomoric, ham-handed attempt to make fun of Trump, his family and administration. But the episode "First Family" might take its biggest shot at former President Bill Clinton for his "criminally poor impulse control."

In Sunday night's episode, Donald and Melania's marriage is on the rocks and the president's told it needs to be saved because of "the threat of the Democrats sweeping the midterms, impeaching you, and potentially putting you, Don Jr., and Jared in jail." The First Couple is admonished, "You need to project the image of a stable, porn-star-free household."

To help them learn how to settle into a proper Washington marriage, Senator Mitch McConnell sets them up on double dates, starting with Bill and Hillary Clinton. The Clintons advise "blindly ignoring each other's flaws" and Hillary's hit for her obsession with big donors while sexual predator Bill admits, "I should be in jail."

Hillary: It was a little hard to get in with all the subpoenas piled up.

Trump: Yeah, whenever Mueller knocks, we just pretend we're a bunch of dogs in here.

Miller: I am the dog!

Bill: Let's get this over with so Hillary can get back to pretending like she still lives here. The key to a Washington marriage is blindly ignoring each other's flaws. Me, for example, I look past Hillary's thirst for the blood of a virgin mega-donor.

Hillary: Aww. And I look past his criminally poor impulse control.

Bill: I should be in jail.

Melania: And what do I get out of it?

Hillary: You get to suckle at the teat of power for decades and someday you, too, could lose the presidency to a dangerous and demonstrably unqualified candidate. Time to go shotgun a bottle of Cabernet.

Later, Melania complains, "Bill gave me that weird Teddy bear with a blinking red light to put on my nightstand."

Next, it's "time to get marriage advice from two people who look like their house is covered in hamster tubes," Vice President Mike Pence and his wife Karen. Of course, the wholesome Pences have always been a target for this idiotic show. Karen's advice for the Trumps is to "live like you're the married dolls in a child's imagination." Why liberals think it's funny to make fun of the Pences for having a perfect marriage, I'll never know.

The Trumps decide to stay together, but the episode ends on a dark note as the president declares at a rally, "The American people elected a husband and wife who are happiest when not spending time together, just like you…We all have shitty marriages."

What a miserable little world Stephen Colbert must live in inside his head; unfortunately it's shared with the rest of us six nights a week.