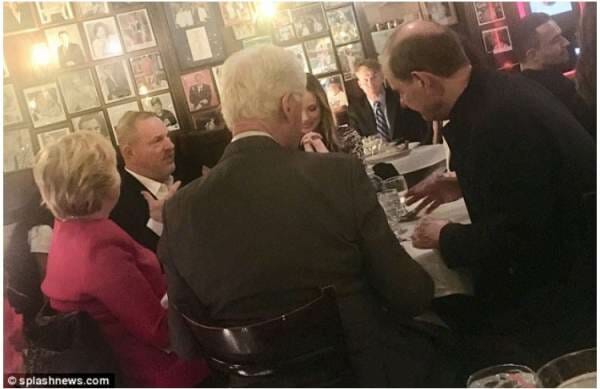 Slick Willie and Hillary met with Weinstein to discuss making a TV documentary about her 2016 presidential campaign.

The documentary got squashed as soon as allegations of rape against Weinstein surfaced.

Via The Daily Mail:

The Clintons were reported to have dined with the disgraced film producer, his wife Georgina Chapman and lawyer David Boies at Rao’s in Harlem, five weeks after Trump was elected president.

Details of their dinner were revealed in a New York Time’s article on Weinstein last year, two months after he was accused of sexually assaulting multiple women in a damning exposé.

Clinton and Weinstein were in talks to create a TV documentary about her failed campaign until allegations of sexual misconduct surfaced against him.

In the exclusive pictures obtained by DailyMail.com, the group are seen at the famed Italian restaurant chatting over some wine and dinner.

Weinstein’s predatory and abusive behavior was an ‘open secret.’ Everybody knew.

Hillary Clinton’s campaign was warned about Harvey Weinstein’s behavior, according to a New York Times article, but she tried to act surprised after a dozens of women came forward with their stories of being assaulted and raped by the Hollywood producer.

Harvey Weinstein and the Clintons were very close friends; Weinstein donated over $250,000 to the Clinton Foundation and donated thousands to Bill Clinton’s legal defense fund.

The disgraced Hollywood mogul surrendered to New York Police in May and appeared for his arraignment in a Manhattan court earlier this month.