The Epic Failure of “Critical Thinking” 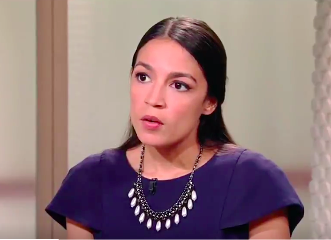 Most every university today prides itself on teaching “critical thinking” skills, but from the evidence, it appears that many universities are failing at both ends of this term—graduates come out with little capacity for thinking at all, let alone thinking “critically.” (Yes, so-called “critical theory” is a special case of this degradation, but deserves separate treatment.)

Case in point is the left’s new It Girl, Alexandria Ocasio-Cortez, who embarrassed herself last week with her extraordinarily ill-informed comments on unemployment (unemployment is low because most people are working two jobs!) and Israel’s conflict with the Palestinians (I’m not really an expert on geopolitics, Occasional-Cortex explained).

Now it is one thing to hear this from a hopped-up left-leaning activist, who exist in great numbers. But as our gimlet-eyed friend who runs Neo-neocon notes, Ocasio-Cortez boasts of graduating fourth in her class from Boston University’s College of Arts and Sciences with a dual degree in  . . . economics and international relations. Let that sink in. Fourth in her class, and she’s a blithering idiot on both economics and international relations. If she’s the fourth-ranked graduate from BU’s College of Arts and Sciences, I’d hate to see who came out on the bottom. If BU has any self-awareness at all, they ought to be asking themselves “What went wrong?”

What can explain this? It is not as though Boston University is Evergreen State College—deliberately dedicated to tendentious ideological instruction. BU is the place that, more than 30 years ago now, was run by John Silber, one of the few sensible college presidents of recent decades. The great Angelo Codevilla only retired from teaching in the international relations department there just a few years ago.  Glenn Loury is on the faculty at BU, though I have a hunch Ocasio-Cortez never took either person for a course.

A perusal of the BU website can turn up a number of plainly leftist faculty in the economics and international relations departments, and that is one obvious explanation. I have a hunch two other factors are at work. First, economics, even on the undergraduate level, has been slowly becoming more mathematically intense in recent years, at the expense of any consideration of economic history or old-fashioned political economy. You will learn good skills from today’s math-heavy economics instruction, but at the loss of direct connection to actual economic issues in the real world. You learn how to make a lot of sophisticated regression models, and how to tease out data sets, but you don’t learn much on how an economy actually works, especially how markets work. The partial exception to this will be the leftist faculty concerned with inequality, labor, and the environment. Hence students will only hear of economic perspectives on current issues from one direction.

Similarly, international relations today often emphasizes theory over historical knowledge and focuses on the hot-button issues of the moment (the BU department website lists several dozen IR courses about the environment and “sustainability”), which would be one reason why Ocasio-Cortez might say she doesn’t have much expertise in the Middle East.

UPDATE: Occasional-Cortex is the gift that keeps on giving. The Daily Caller reports her latest deep thoughts:

Where to begin. First, at least she is consistent with the Democratic Party position (at least Stephen Douglas’s position) that the question of slavery should be decided by the people of the Kansas territory alone (“popular sovereignty” he called it), which meant that the national government lacked the constitutional power to prevent the spread of slavery to the territory, even though the constitution gives Congress the power to make regulations for U.S. territories. And the big push among Democrats in the 1850s was to have people move to Kansas to tip the vote in favor of slavery (and by extension the Democratic Party), just as Democrats today want people to move to the United States to tip the vote in favor of Democrats. So, to the point: If the people to Kansas decide to vote for Republicans this year, will that settle for Occasional-Cortex “who we are”?

I guess we should give Occasional-Cortex points for keeping full faith in Democratic Party history.