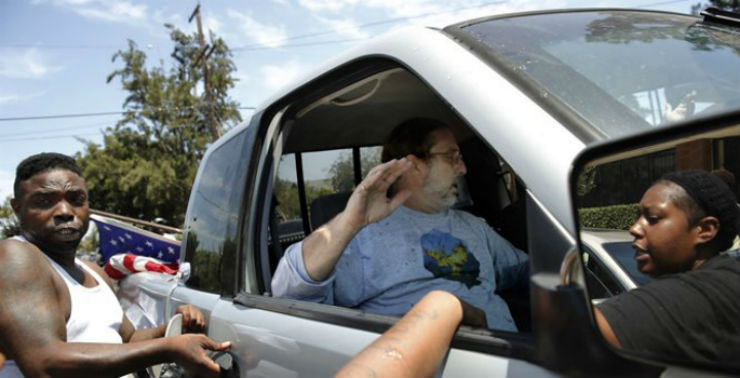 I’ll be honest, I had to wait two days to write this piece to make sure it wasn’t one of Bad Luck Fale’s recent two word NSFW promos for New Japan Pro-Wrestling just repeated 400 or so times a la Spider Jerusalem. The anger remains, but the thoughts aren’t as expletive-laced.

It was barely over two years ago I proclaimed on this hallowed website the 2016 election, “is as close to the French Revolution as America will ever get.” The idea was, of course, the anger at the current political climate was throwing the door open for everyone to air their grievances at the opposition or the establishment through any means necessary without worry of the consequences. It was a prediction which has, sadly, come true especially in the realm of social media – and, to a lesser extent, society, as a whole.

We now live in a world of mob rule where one slight misstep from one political opinion to the other leads to disaster and destruction. The mob wants robots and automatons to perform service because anyone bothering to not go with one accepted flow or the other is going to see their livelihood torn down and burned at the stake or the guillotine. Make no mistake, mob rule has existed in this world since man decided to form communities and cities to congregate. It’s just gotten worse.

The most recent example of people run amok with their tiki torches alit with self-righteous rage is the one involving former Guardians of the Galaxy Vol. 3 director James Gunn. Multiple uncouth and offensive tweets from 2008 to 2010 (when he was a Hollywood nobody) were uncovered by some pharisaic gadfly. The mob pounced, and Gunn’s career is more than likely toast. His crime? Daring to speak out rather vociferously against both the current president and calling for the firing of Roseanne Barr.

This was two days before a leftwing Twitter mob targeted famed comic illustrator Lee Weeks for following a reviewer who is a bit of a jerk and, apparently, a Donald Trump supporter. He’s also taken heat for following Dana Loesch and Tucker Carlson on Twitter. There’s also the sports journalist mob first targeting Buffalo Bills rookie quarterback Josh Allen and Milwaukee Brewers reliever Josh Hader for rather stupid tweets made when they were teenagers (both are now in their 20s).

Weeks, Allen, and Hader appear to have the support of their colleagues – something Gunn enjoyed as well – so their careers may be able to continue (or start, in Allen’s case). The mob is still pushing the issue on Hader, and whether they decide to lay siege has yet to be determined.

It’s easier to target someone’s livelihood, instead of their actual lives – as was the case in the French Revolution – because of economic liberalization. Those who were executed during Revolutionary France mostly had titles and were, thus, tied to said title until their deaths. This includes those who were members of the aristocracy. Celebrity does not equal aristocracy in America – so their lives don’t need to be extinguished, just their ability to earn a living in a publicized field. Hence, the mob action.

The defense of this mob-ruled social media nuttery is the so-called “new rules.” The angst-ridden throng doesn’t care who actually started the “rules” they just want to see their enemies destroyed. The puppet masters are mountebanks and grifters, all pleased to push the horde towards their next target despite pathetic pleas of, “we don’t want to behave this way, but we’re forced to,” as an excuse for their ginning up of controversy. They’re charlatans following the steps and tactics of those who came before them; the William Jennings Bryans and Saul Alinksys who lined their pockets with cash after they believed their work was done.

It has to stop.

The so-called “new rules” only exist because you allow them power over your lives and enjoyment. You are the ones sitting there allowing yourselves to give in to your baser, mob-induced instincts and trying to ensure there’s no one left to actually enjoy any fruits of their labor.

At least my Vikings ancestors just burned villages during raids. The mob, on both sides, is burning and salting Carthage’s (or maybe Sodom and Gomorrah are better examples) land with every rage-filled attack, thus leaving it unfit for anyone to attempt to build again.

I reject these rules (or to paraphrase Fale, “screw ‘em”) and I urge everyone to do the same. There’s nothing wrong with public debate on issues, especially when it becomes heated. I encourage it. But deciding a celebrity or some kind of a private citizen has to be defenestrated or led to the gallows because they do not agree with me is rather repugnant.

It is important to point out private corporations can do whatever they want when it comes to hirings and firings. Disney was well within its rights to disassociate itself from Gunn. World Wrestling Entertainment was well within its rights to fire Sal Siino for the sins of his wife. DC and Marvel would be well within their rights to no longer employ Weeks. I just don’t believe it should happen because of the “new rules.” It only encourages the mob – and their trickster leaders – to target others for wrongthink and, thus, keep the purging and French Revolution in America ongoing until there’s nothing left but bland, tasteless recreation which is neither entertaining nor enjoyable.