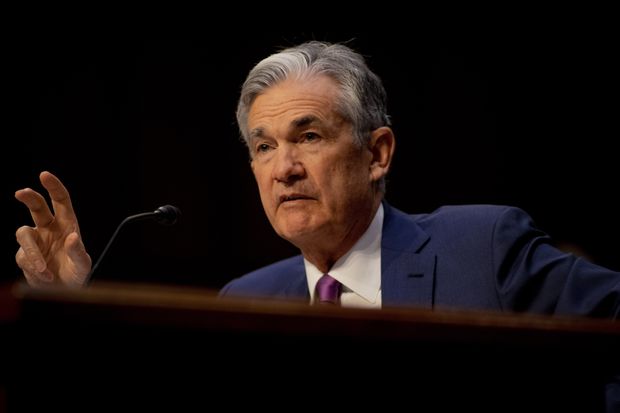 has begun to challenge the Federal Reserve for raising interest rates, while also bashing China and Europe for their falling currencies. This could become stage two of Mr. Trump’s dangerous trade war, or he could use it as an opportunity to lead the world toward a more stable monetary order. The latter is a long shot, but given the ominous trend of events we might as well suggest it.

The only surprise is that Mr. Trump waited as long as he did to criticize the Fed. As a real-estate man, the President likes low rates. We also know from our reporting at the time that he chose

to run the Fed largely because Treasury Secretary

Now Mr. Trump wants to cash that check, but he doesn’t understand that his public intervention probably will have the opposite effect. The Powell Fed is undertaking the difficult task of trying to negotiate a return to normalcy after a decade of unprecedented monetary manipulations.

Despite their celebration in the press, previous Fed chairs

left Mr. Powell a distended balance sheet of $4.5 trillion in securities plus a legacy of distorted asset prices and a government-directed bond market. No one knows how this transition will turn out because no one has ever done it.

Mr. Trump’s criticism means that Mr. Powell will have the added burden of operating under suspicion of political influence. He may have to maintain a steady pace of interest rates to show markets that he and the Fed are independent. But if he decides slower increases are warranted, markets will wonder if his calculations are political. By lobbying for fewer rate increases, Mr. Trump may get more and higher.

On the merits, it isn’t clear that the Fed has moved too fast. Some of our friends are fretting that the yield curve is getting close to inverting—short-term yields exceeding long rates—but it’s hard to know what this means given the Fed’s continuing dominant role in the long-bond market.

Consumer prices in the past year have climbed 2.3% through June without including food and energy, which is higher than the Fed’s target of 2%, while the economy is growing faster than it has since 2004 and maybe 1999. Negative real interest rates amid rapid growth have rarely ended well. Recall how Mr. Bernanke and

As for the strong dollar, the cause is less the Fed than Mr. Trump’s pro-growth policies. The U.S. economy is growing faster after corporate tax reform and deregulation. This has invited a flood of capital to the U.S., which has put pressure on foreign currencies. But Mr. Trump should see this as a success. The 1980s and 1990s were fast-growing, strong-dollar eras of capital flows to the U.S.

Mr. Trump’s trade policies are also becoming a currency problem. Faced with the threat of U.S. tariffs on some $500 billion of its exports, China seems to be letting its currency depreciate to compensate. The yuan traded at 6.27 to the U.S. dollar on April 18 but fell to 6.77 on Friday. That should help the competitiveness of Chinese exports in the short term, albeit at the risk of more capital flight.

None of this helps the world or U.S. economies. Exchange-rate fluctuations add uncertainty to investment decisions and lead to slower growth. If countries turn to currency devaluation as another protectionist tool, they will further distort trade and investment flows. That’s what happened in the 1930s as countries indulged what became known as “beggar thy neighbor” currency devaluations for short-term competitive advantage.

“As with exchange depreciation to raise domestic prices, the gain for one country was a loss for all,” wrote economic historian

in his history of the Great Depression. “With tariff retaliation and competitive depreciation, mutual losses were certain.”

Which brings us to Mr. Trump’s monetary opportunity, if he and his advisers have the wit to seize it. The global monetary system has operated with fiat currencies since the collapse of Bretton Woods in 1971 when

closed the U.S. gold window. The world’s major central banks have gone their own way, often leading to sharp and destructive currency movements that in the worst case have contributed to market crashes (1987) or recessions (2008).

With the world trading regime under stress, Mr. Trump could ask his Treasury to lead the developed world’s finance ministers and central bankers toward a more stable system. Mr. Mnuchin doesn’t have much experience in this area, but his Under Secretary for International Affairs

does. (For the record, Mr. Malpass has not suggested this to us.)

They could put together a task force of American and foreign experts to debate and recommend how to navigate the transition from postcrisis policy and promote more currency stability. Experts who have written for us over the years include Messrs. Warsh and Taylor, economists

and historian and investor

Mr. Lehrman in particular has argued that the root cause of the large U.S. trade deficit is the dollar’s role as the world’s reserve currency. That has been an “exorbitant privilege,” as Frenchman Valéry Giscard d’Estaing once put it, but a new monetary arrangement could reduce the burden on the U.S. to be the world’s sole absorber of surplus goods.

The French have long been interested in monetary reform, and the Chinese might be as well if Mr. Trump called a tariff truce in return for their participation.

Monetary reform may seem an impossible task given Mr. Trump’s lack of knowledge and desire for disruption. But then he’s also the President who knows little about constitutional law but has made two excellent nominations for the Supreme Court and many more to the appellate courts.

The world’s economy is growing faster again, but protectionism and devaluations are increasingly threats to sustained prosperity. Mr. Trump has shown he can shake up global institutions but so far he has failed to create anything better.

Historian Kindleberger sums up what happened in the 1930s when competitive devaluations compounded trade disputes: “When every country turned to protect its national private interest, the world public interest went down the drain, and with it the private interests of all.” Without a change of direction, this is where Mr. Trump is headed.