Waiter Khalil Cavil claimed a Texas patron stiffed him and left a hateful, anti-Islamic message on their bill after he served them.

Cavil went public with his shocking story and even made the news. 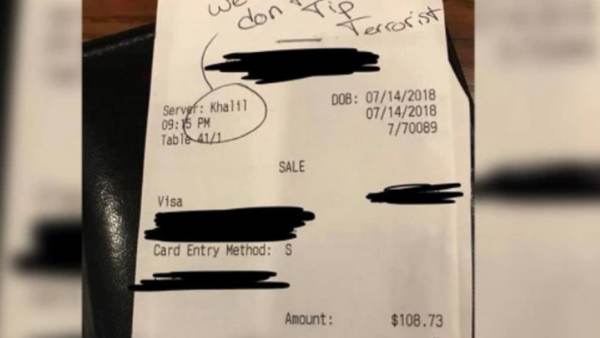 Khalil Cavil claimed the patron wrote, “We don’t tip terrorist.” on their receipt.

But after an investigation the Saltgrass Steak House discovered Khalil’s story was completely made up.

This fraud even went on TV to tell his lies.

“I hope that the people who wrote me that note find Jesus and I hope that he can experience the same love that I’ve experienced from Jesus Christ.” Khalil Cavil is turning an incident meant to tear him down, into one that will build him up. https://t.co/qNKr2XFmJA

A Texas restaurant server cooked up a steaming-hot hoax when he claimed a racist patron stiffed him and wrote “We don’t tip terrorist” on their bill, according to a new report.

“After further investigation, we have learned that our employee fabricated the entire story,” Saltgrass Steak House COO Terry Turney said Monday in a statement to the Odessa American newspaper.

“The customer has been contacted and invited back to our restaurant to dine on us. Racism of any form is intolerable, and we will always act swiftly should it occur in any of our establishments. Falsely accusing someone of racism is equaling disturbing.”

Waiter Khalil Cavil, 20, who is black, had claimed the patron stiffed him on a $108 meal and instead wrote the hateful message.

It was all a hate hoax.

Are you kidding me? A server named Khalil Cavil was left no tip & a note saying “we don’t tip terrorist” at the Saltgrass Steak House in Odessa, TX, because the costumer thought he is Muslim. Although he’s Christian the point is just how much hate Muslims are enduring in America. pic.twitter.com/hrHnrRmMRO