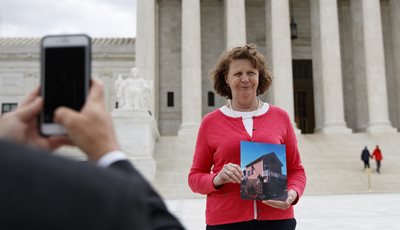 It took the House of Representatives sixteen months to pass HR 1689, the Private Property Rights Protection Act, which finally happened yesterday by acclamation. It took Congress thirteen years to act on this issue after the execrable Kelo v City of New London Supreme Court decision, which held that eminent domain could be used to seize property from one private owner to another in the name of “economic development.” Rep. James Sensenbrenner, who authorized the PPRPA, celebrated the belated victory yesterday in a story that no major media outlet covered:

The bill addresses the controversial Supreme Court decision in the 2005 case Kelo v. City of New London, which expanded the eminent domain power granted by the Fifth Amendment of the Constitution. In Kelo, the Court ruled that “economic development” can be justified as a “public use” under the Constitution’s Takings Clause.

To combat this expansion of power, H.R. 1689 would make any state or locality that uses the economic development justification for eminent domain ineligible from receiving federal economic development funds for two years. This creates a major incentive for governments to respect the private property rights of its citizens.

Additionally, the legislation bars the federal government from exercising eminent domain powers for the purposes of economic development.

Amazingly, not one major media outlet picked up on this, not even to note that it took thirteen years for Congress to address the issue. It might not have gone far even now had it not been for renewed interest in the case from the recent independent film Little Pink House, starring Catherine Keener as Susette Kelo and Jeanne Tripplehorn and produced by Ted Balaker, formerly of Reason.

It’s tough to understand the indifference. The House vote didn’t have much drama to it, but the issue directly aims at the relationship we have with government and the nature of private property, a core right recognized in the Constitution. Kelo perverted that relationship, putting everyone’s property rights hostage to politicians who want to hand off spoils to bigger entities. The case prompted some states to step in and redefine eminent domain to prevent another New London abuse, but Congress has remained relatively passive about it until now.

Sensenbrenner’s bill will move to the Senate, but it doesn’t have much time to succeed. The legislative calendar will start backing up very soon with budget bills, the Brett Kavanaugh confirmation, and potential action to amplify sanctions on Russia and Iran. If the PPRPA doesn’t pass by the end of this year and get signed into law, the House will have to start over from scratch in the next session — where a potential change of leadership might spell an end to those efforts. Those interested in imposing onerous consequences for cities and states taking away private property to hand it off to other private parties need to contact their senators immediately to get action on Sensenbrenner’s bill.

On top of that, there is a question as to whether Donald Trump will actually sign it into law. Trump has declared himself a fan of eminent domain for the purpose of economic development, which isn’t too surprising given the nature of his business empire. The House vote would be strong enough to override a veto, so the Senate vote had better be almost as strong. Trump might not like to see the new limitation put on his desk, but he’d be careful about vetoing it and looking foolish with a successful override.

Little Pink House has just become available on DVD and digital download. Perhaps renewed interest in the film will prompt renewed interest in Congress’ inaction over the last thirteen years, and push the Senate into immediate action. Let’s hope so, anyway.