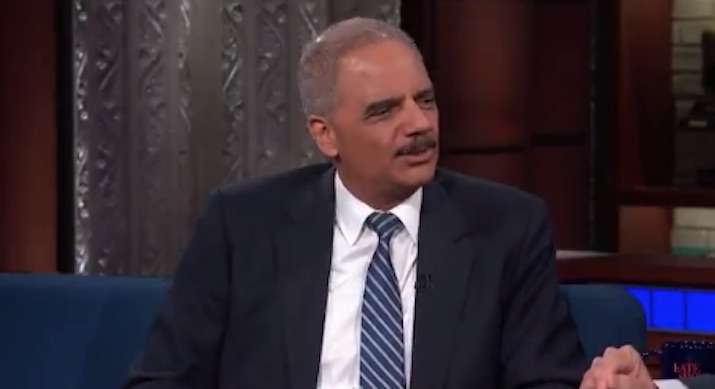 He’s running … ? The catalyst for this exchange comes from White House correspondent April Ryan, who tweeted last week that Eric Holder has seriously considered running for the Democratic presidential nomination in 2020. That later prompted a damning-with-faint-praise endorsement from CNN’s Ana Navarro, noting that the former Attorney General has “the personality of a wet sock” on television but still beats Donald Trump for her vote.

The “wet sock” did ten minutes with Stephen Colbert last night, pointedly not denying his potential as an electoral candidate in what is turning out to be a very crowded field. We’ll get an answer “early next year” whether the man behind the Marc Rich pardon and the cover-up of Operation Fast & Furious returns to, er, clean up Washington:

On #LSSC tonight: @StephenAtHome asks @EricHolder if there's any truth to rumors of a presidential run in 2020. pic.twitter.com/yz2esF3lZg

“I’m thinking about it and what I’ve said is that I’d make a determination sometime early next year,” Holder said on CBS’s “The Late Show with Stephen Colbert.” “My focus, really, now is on 2018, the midterms and trying to make sure that Democrats take back the Senate, take back the House, and that we do well, importantly, at the state level.”

Colbert raised the idea by reading a post to Twitter by journalist April Ryan, who cited sources close to Holder to report last week that he was “seriously considering” a White House run. The post prompted applause from the “Late Show” audience, which Holder paused for a second to soak up.

“Were you just taking the temperature of America just now?” Colbert asked the former attorney general, to which Holder replied, “I was just looking to see potential contributors, you know. And Cabinet members.”

As the Washington Post notes, speculation around Holder’s presidential ambitions isn’t new. Well before Ryan broke the news on Twitter, Holder talked about it himself during a high-profile visit to New Hampshire:

Buzz increased around a possible Holder bid last month, when he spoke at a “Politics and Eggs” breakfast in New Hampshire that is considered a rite of passage for potential presidential candidates.

Holder, who served during the Obama administration, told that audience that he was considering a bid for the Democratic nomination, but devoted most of his prepared remarks to his current work challenging congressional districts that have been gerrymandered to favor Republicans.

In response to a question, Holder was also critical of President Trump’s judgment in issuing a string of pardons, including one granted the day before to conservative commentator Dinesh D’Souza.

“If you use all the typical metrics that we use in the Justice Department . . . very few of these people you’d consider good candidates for pardons,” Holder said.

Ahem. Not only was Holder present for the corrupt pardon issued to then-fugitive Marc Rich, he was instrumental in helping Bill Clinton issue it on behalf of Rich’s ex-wife, an influential donor. Various news outlets raised the issue when Holder joined Barack Obama’s campaign team and then later in his time as AG. In 2013, Slate revisited the smelly actions of Holder and placed him right at the center of it:

As deputy AG, Holder was in charge of advising the president on the merits of various petitions for pardon. Jack Quinn, a lawyer for Rich, approached Holder about clemency for his client. Quinn was a confidant of Al Gore, then a candidate for president; Holder had ambitions of being named attorney general in a Gore administration. A report from the House Committee on Government Reform on the Rich debacle later concluded that Holder must have decided that cooperating in the Rich matter could pay dividends later on.

Rich was an active fugitive, a man who had used his money to evade the law, and presidents do not generally pardon people like that. What’s more, the Justice Department opposed the pardon—or would’ve, if it had known about it. But Holder and Quinn did an end-around, bringing the pardon to Clinton directly and avoiding any chance that Justice colleagues might give negative input. As the House Government Reform Committee report later put it, “Holder failed to inform the prosecutors under him that the Rich pardon was under consideration, despite the fact that he was aware of the pardon effort for almost two months before it was granted.”

On Jan. 19, 2001, Holder advised the White House that he was “neutral leaning favorable” on pardoning Rich. But the U.S. pardon attorney, Roger Adams, needed to sign the pardon, too, and a background check needed to be done. The White House waited to contact Adams until slightly after midnight on Jan. 20, hours before Clinton would leave office. Here’s how a recent American Thinker piece described the scene:

Adams would be required to sign the pardons, and when he was informed by White House staff that night, a perfunctory check was done. Adams was stunned to learn that Rich and [Rich’s partner Pincus] Green were both fugitives. He tracked down Holder and called him at his home at 1 a.m. that morning.

Adams informed Holder that Clinton was giving serious consideration to pardoning the two fugitives. Holder told Adams that he was aware of that fact, and the conversation abruptly ended.

If and when Holder runs, expect a lot more discussion to take place about the Rich pardon and Holder’s role in gaslighting the DoJ to get it.

Here’s the rest of Holder’s time with Colbert, where to be fair he demonstrates more personality than Navarro credits. Be sure to watch out for the discussion of the need for independence in the Department of Justice, which in the context of the Rich pardon and Operation Fast & Furious qualifies as an absolute joke. To be fair, though, it’s the best one that Holder manages to tell in ten minutes.