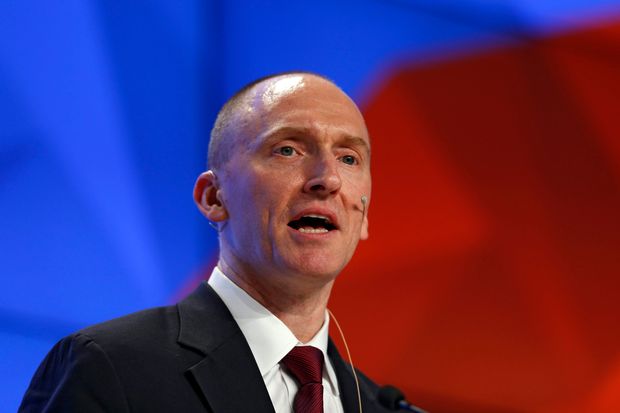 and now we know why the bureau resisted disclosure. Even in heavily redacted form, the applications confirm that the FBI relied on dubious partisan evidence to justify its warrant and withheld relevant information from the court.

The committee’s findings were based on a review of the FISA applications, which were still classified at the time. The main

claim was that the FBI made the

dossier—which was commissioned by the Clinton campaign and Democratic National Committee—“an essential” part of its initial application. The FISA documents confirm this.

More than half of the first FISA application’s 66 pages are devoted to technical matters and a history of Russian electoral interference. Of the roughly 25 pages that focus on Mr. Page, much of it reports his dealings with Russians, his response to the news that he was under investigation, and a largely redacted conclusion.

The guts of the application is titled “Page’s Coordination With Russian Government Officials on 2016 U.S. Presidential Election Influence Activities.” This is the FBI’s evidence section, and, though heavily redacted, it looks to be almost entirely dossier-related.

Its opening paragraph says that the “FBI has learned that Page met with at least two Russian officials” on a trip to Russia in 2016 and that it got this information from an “FBI confidential human source (Source #1),” who is dossier author

Most of what is unredacted that follows details the dossier’s claims about these Russian meetings, with further reference to “Source #1.”

This is important given that FBI assistant director

told Congressional investigators in October 2017 that the FBI’s efforts to corroborate the dossier were still in their “infancy” at the time of the first application. Months later former FBI Director

referred to the dossier as “salacious and unverified.” To date no investigator has offered public proof of the dossier’s most damaging claims. Yet on the basis of an uncorroborated document commissioned by a rival presidential campaign, the FBI accused a U.S. citizen of being an “agent of a foreign power” who should be wiretapped.

Mr. Nunes also reported that the FBI did not inform the FISA court that the dossier and trusted “source” (Christopher Steele) were paid by the Clinton campaign. And sure enough, nowhere do the FISA applications mention the words Clinton, Democratic National Committee, Fusion GPS (the Clinton-financed oppo research firm that hired Mr. Steele), or Fusion co-founder

Several convoluted footnotes refer to “Source #1” (Mr. Steele) and a “U.S.-based law firm” (Clinton firm Perkins Coie), as well as an “identified U.S. person” (Mr. Simpson) who was “likely” interested in discrediting Mr. Trump. These obscure references are quickly followed by another footnote in which the FBI says that, despite that motivation, it is confident that “Source #1” is “credible.” So the FBI was vouching for this partisan source.

It’s true that the first application doesn’t mention any names. But it does refer to “Candidate #1” (who is clearly

signed three of these applications, yet he claimed on his recent book tour that he “still” didn’t know who paid for the dossier.

The FISA documents also confirm that the FBI cited a Sept. 23, 2016 story in

News to buttress its Steele dossier information with the court—even though Mr. Steele was also the source for the Yahoo News story.

Democrats insist that the FBI used the Yahoo story only to describe Mr. Page’s response to the investigation, not for corroboration. The applications show otherwise. The FBI cites the Yahoo News story after its dossier-evidence section, noting that the story said that “intelligence reports” and a “well-placed Western intelligence source” had also made claims like those in the dossier. But the “reports” were the dossier, and the “Western intelligence source” was Mr. Steele.

Our media friends are dismissing all this as no big deal because they say Mr. Page’s history of personal Russian dealings justified his surveillance in any case. Yet so far no one has produced evidence that Mr. Page was anything but an innocent abroad who liked to boast about his contacts. He certainly was a minor figure in the Trump campaign.

And that still doesn’t justify the FBI’s use of uncorroborated partisan smears as part of its application. At best the FBI appears to have played fast and loose with the facts to stretch the ethical boundaries of the FISA statute. At worst the FBI dissembled to target a man because they wanted to unleash a counterintelligence campaign against a presidential campaign. Either one tarnishes the FBI’s reputation.

Democrats and their media allies won’t admit any of this because they are invested in the narrative that Russian meddling elected Donald Trump. But two years of investigation later we’re still waiting to see evidence of that. What the FISA applications show is that the FBI did abuse its surveillance powers. There’s still more to learn, and Mr. Trump should declassify and release everything that can be safely disclosed.