Winning the Fight Against Multicultural Concessions 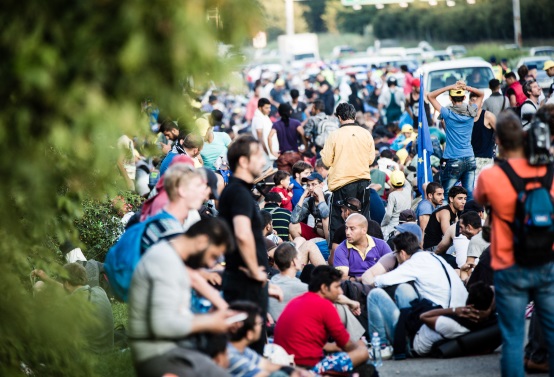 Pressure to tighten borders and ease migrant costs is transforming European politics. The near collapse of German chancellor Angela Merkel’s government last month exposed the spreading conflict between the European Union and its sovereign nations. Americans torn by vicious immigration battles of their own might consider some disturbing parallels with events across the Atlantic.

Transnationalists, technocrats, and secularists control the EU and its migrant policies, such as they are. Popular nationalism stuns and offends them. Merkel has long insisted that Germany “not act unilaterally, or without consultation” on immigration control, but neither does she want to shatter her fragile coalition, six long months in the making. What policies exist, what international laws apply, and what enforcement procedures back up those laws and policies are fiercely disputed.

For the most part, Europe’s ruling class considers immigration restriction immoral and politically poisonous. EU leaders—raised to power like janissaries, drained of national loyalties—compose a continental shadow state. This league professes, with or without conviction, that migrants contribute a welcome, necessary injection of diversity, youth, and fresh ideas to closed, aging, often fearful societies. Harboring an unlimited number of “refugees” is a moral obligation.

There is no migrant crisis and numbers are down, top European journalists insist deceptively. They know full well that profound migrant pressure persists. About 200,000 new asylum applications have been filed this year in Germany, for example, “down” to some seven times what they were in 2009. Asylum abuse is rampant in many countries. Countless unregistered aliens roam freely in a visa-free netherworld. Authorities pretend that all is well and as it should be, which is a recipe for social resentment.

Into this hive strode the inimitable Donald J. Trump, stirring the pot, accused of undercutting NATO and the EU. In Brussels, he asked Western Europe to pay more for its own defense and noted that Germany was on its way to becoming an energy “captive of Russia.”

In London, he told the Sun newspaper that unrestricted immigration was “very bad for Europe,” and added, “you are changing the culture, you are changing a lot of things, you’re changing security,” chastising the United Kingdom’s centrist prime minister, Theresa May, who is trying to bridge incompatible views on Brexit and immigration policy, displeasing both the open-borders left and hardline nationalists.

Then came Helsinki, and Trump seemed to become his own Russian captive. His ill-fated meeting with Vladimir Putin dissolved into anti-Trump hysteria and cries of “treason.” Missed was that Trump once again made it clear that he doesn’t want the U.S. to follow the EU lead on immigration.

Nationalist parties in Europe attract middle- and working-class taxpayers who feel the uneven burden of the impacts of immigration: on wages, health services, schools, and crime. It’s their quality of life being threatened. Unlike affluent metropolitans, they rarely benefit from a supply of cheap menial labor.

And it’s more than out-of-pocket costs. Continental ordinaries wish to preserve their inherited language, arts, religion, and wealth. They own property, raise families, keep their houses tidy, and tend toward dutiful conformity. They respect order and hygiene, eat pork, and are fond of dogs. They disapprove of riff-raff, of which they have plenty of the native kind. They’re not an emerging Wehrmacht, Vichy France, or Fascisti. They think and live regionally, and are comfortably attached to their ways.

Their ascendant nationalism is not bellicose but defensive. In fact, Gallup reports that only 29 percent of French, 20 percent of Italians, and 18 percent of Germans say they’re willing to fight for their country. While it is even less conceivable that these nationals would fight for the EU, the numbers signal broad complacency about self-defense. Great Britain and Europe still have some crack military forces, but European civilians today are likely to be greens and epicureans, not fighters. The EU is often praised as a shield against European warfare.

Respectable opinion labels nationalist resurgence as “far right” and “crypto-fascist.” The intent is to shame and discredit—even criminalize—communal loyalties and preferences realized over centuries, essential to self-preservation. We must welcome outsiders and remember the crimes of Old Europe, the EU establishment stresses. But it’s no sale with Johann, Jean, and Giovanni.

Migrants routinely appeal asylum rejections to prevent deportation. Swamped by applications, Germany’s Office for Migration and Refugees and its local branches is painfully slow in deciding cases. Clogged bureaucracies try to sort out bogus claims while handling a daunting number of requests. As in the United States, officials and factions opposing restriction complicate efforts at border control. Some activists, notably “rescue ships” in the Mediterranean, seek to promote the foreign influx.

In 2015, about one million “refugees,” carrying no identification papers and without visas, boldly crossed Europe’s southeastern borders as might an invading army. Some were middle-class strivers, looking for opportunities not available in the lands that spawned them. Some were genuine refugees. Others were adventurers, on the run, avoiding conscription, or jihadi. World media focused on the few women and children among them, declaring the incursion a humanitarian crisis, but the rush had the feel of Muslim hegira. “Europe’s response is madness,” Hungary’s prime minister Viktor Orbán said at the time, rendering himself a monster in the eyes of respectable European leadership.

Three years ago, Germany did not know who it was letting in, and it is uncertain who is living in there now. Too trusting in accepting asylum applicants’ made-up backstories, Germany contains an estimated new 1.6 million guests and residents. How many more have entered via family reunification rules is unknown, since the German government conceals the numbers. Many tax-paying Germans feel their trust and good will is being gamed and threatened. (Additionally, longstanding experience with Turkish immigration is at best mixed.)

Migrants fill jobs Germans don’t want to do, like tending to old people in nursing homes, driving taxis, or cleaning streets. Many are unemployed. The number of foreigners in Germany on the full dole has risen from an estimated 200,000 to one million since 2015. While living off the state, not just in Germany, the new neighbors from the Mideast and Africa might keep to themselves. They see themselves on the right side of history. Folding into the cultural fabric of Europe is not part of their plan, and much of that fabric they might abhor or wish to overturn. They don’t plan to leave or go home soon. There might be no “home” to go to.

Italy too is in flux, having no clue what to do with its sub-Saharan African immigrants. Last month, the no-apologies restrictionist Matteo Salvini—Italy’s interior minister and a rising political star—turned away the Aquarius migrant ship and vowed no more boat arrivals from Africa. Salvini’s motto, “Italy First,” reflects his in-your-face Trumpismo.

During the last four years, an estimated 600,000 Africans have entered Italy uninvited, assisted by open-borders transporters. They come, destitute and semi-literate, from vast urban slums with no sanitation and barely electrified villages. And as everyone knows, there are hundreds of millions more back home, some of whom are surely itching to migrate. Europe’s great unthinkable is the prospect of uncontrolled African migration “almost too overwhelming to contemplate,” says a world-traveled London banker.

Facing porous borders and its own immigrant tide, Americans should hope that hardheaded realists in Berlin and Brussels—and their colleagues in Washington D.C.—are developing strategies to contain future migrations. They can be sure that shrewd observers in Moscow and Beijing are watching intently these ongoing tests of Western resolve, now playing out on two different continents.

Gilbert T. Sewall is co-author of After Hiroshima: The United States Since 1945 and editor of The Eighties: A Reader.