Bad news from Cory Booker: If you don’t oppose Kavanaugh, you’re complicit in the evil 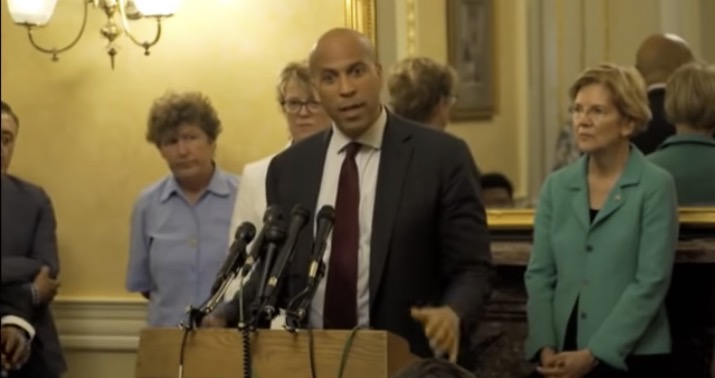 This farking guy. He’s a better actor than he was six months ago but the essential problem remains: He tries way, way too hard. Where a 7 or 8 on the outrage meter would suffice for Democrats’ purposes at this point in the nomination process, he dials it up to 15 by condemning complicity in “evil.”

And then, not content to stop there, he dials it up to 20 by quoting Psalm 23.

If America has reached the point where references to the valley of the shadow of death aren’t extremely weird even for post-Bork Supreme Court politics, we as a people need a complete rethink on the powers we grant to the judiciary. And knowing that abortion is bound to be a hot topic at the confirmation hearing, if I were Booker I wouldn’t get too high and mighty about which party represents the shadow of death.

As for Kavanaugh, the Biblical evil that Booker is doing battle with, I enjoyed this understated description of him in Jack Crowe’s post on Booker’s comments:

Kavanaugh, a Christian father of two who regularly donates his time to serve food to the homeless, has been pilloried in the media for taking on credit card debt to purchase season tickets to the Washington Nationals. The double Yale graduate has also been criticized and labeled a “frat boy” by liberal advocacy groups due to his first name and alleged penchant for beer drinking.

I feel a tiny bit sorry for Booker that he tries as hard as he does, knowing that it’s not going to earn him a single primary win in 2020. He wants it so badly! All righties should thank him for this performance, though. In an age of negative hyperpartisanship, with Republicans able to confirm Kavanaugh on a party-line vote, every over-the-top Democratic denunciation makes it that much easier to pressure Collins, Murkowski, and Rand Paul not to let the hysterical liberals win by borking him. Rand won’t admit it, but as this clip of Booker makes the rounds (it was posted by the RNC’s “war room,” not coincidentally) it’ll make it a tiny bit harder for him to justify voting no in the very unlikely event that he’s planning to. “You’re siding with the guy who thought Kavanaugh was ‘evil,’ Rand?” Paul won’t want to have to answer that question. Thanks, Cory!