Burn, the tape: Did Trump commit a crime in Cohen-recorded convo? 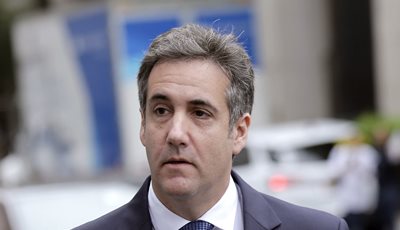 A good question, one which no doubt will get lots and lots of debate over the next few days, or at least until Donald Trump rage-tweets on another topic. Lanny Davis, who now represents Michael Cohen, provided CNN with the recording of a phone call with Trump from September 2016 as they discussed how to deal with former paramour Karen McDougal, who wanted to sell the story of their affair to the media. In the tape, the two discuss setting up a company to potentially buy the rights away from the National Enquirer to surreptitiously pay them back. The deal never got off the ground, but Trump clearly knows what’s going on despite earlier denials:

Cohen told Trump about his plans to set up a company and finance the purchase of the rights from American Media, which publishes the National Enquirer.

“I need to open up a company for the transfer of all of that info regarding our friend David,” Cohen said in the recording, likely a reference to American Media head David Pecker.

Trump interrupts Cohen asking, “What financing?” according to the recording. When Cohen tells Trump, “We’ll have to pay.” Trump is heard saying “pay with cash” but the audio is muddled and it’s unclear whether he suggests paying with cash or not paying. Cohen says, “no, no” but it is not clear what is said next.

Politico has a clip of the most pertinent 40 seconds, and the Washington Post has the transcript:

COHEN: … Um, I need to open up a company for the transfer of all of that info regarding our friend, David, you know, so that — I’m going to do that right away. I’ve actually come up and I’ve spoken —

TRUMP: Give it to me and get me a [UNINTELLIGIBLE].

COHEN: And, I’ve spoken to Allen Weisselberg about how to set the whole thing up with …

TRUMP: So, what do we got to pay for this? One-fifty?

TRUMP: Yeah, I was thinking about that.

TRUMP: Maybe he gets hit by a truck.

COHEN: Correct. So, I’m all over that. And, I spoke to Allen about it, when it comes time for the financing, which will be —

TRUMP: Wait a sec, what financing?

COHEN: Well, I’ll have to pay him something.

In the end, Trump and Cohen didn’t arrange payments at all, or so everyone claims. David Pecker ended up holding the bad with McDougal, having paid her $150,000 to “catch and kill” the story. That still leaves Pecker in a potentially liable situation for making what could be considered an in-kind contribution to Trump’s presidential campaign without disclosure, and both Cohen and Trump for knowing about it and not reporting it. The tape makes that foreknowledge clear, which is why Davis is releasing it to the press. It’s the kind of machination for which John Edwards wound up getting prosecuted, and for the same purpose — to hide an illicit sexual affair from voters.

But does the tape actually show evidence of a crime? CBS legal analyst Rikki Klieman doesn’t think it quite gets there, although it certainly shows a pattern:

"There's no question the president knew about it… the question becomes whether or not it's a campaign finance violation because if they knew about it, simply knew about it, they had to account for it because it's an in-kind contribution" — CBS News legal analyst @rikkijklieman pic.twitter.com/StvWaiLpCM

If it’s incriminatory, why did Rudy Giuliani want to get this story out now? Klieman guesses that Giuliani figured it was coming out anyway and wanted to get ahead of the curve to spin it. Even so, the tape itself isn’t a smoking gun:

"It looks like they're trying to cover up something, hide something. Now, we have to remember that it was certainly legal for Michael Cohen to tape that conversation, although it may have been highly unethical." — @rikkijklieman pic.twitter.com/VSYUK3eoMb

Under normal circumstances, the tape itself might have been enough to kill off a political career, even without any legal consequences following from it. Or would it? Twenty years ago, the FBI found a blue dress with presidential sperm all over it, proving that Bill Clinton perjured himself in court testimony over his behavior in the Oval Office, and yet he managed to survive the scandal. Not only did Clinton defiantly remain in office, his wife almost ended up succeeding him. Lanny Davis should remember that well, having been Clinton’s attorney at the time.

It’s not quite the same situation now, as Trump will have to run for re-election in the wake of this scandal. However, the Clinton precedent from 1998 helped Trump immensely in 2016. The media amplified rumors of Trump’s affairs even without McDougal coming forward; even worse, other women went public with claims of sexual harassment, and the infamous Access Hollywood tape emerged a month before the election. Trump won anyway, with illicit sex and boorish behavior having been successfully divorced from political consequences nearly twenty years earlier. As long as this tape or others like it don’t demonstrate outright indictable conduct, don’t expect it to change anyone’s votes. Trump’s personal amorality has already been baked into the cake.

However, there still is the possibility of those legal consequences. They’d better get something more than the in-kind campaign finance violation, though. The Edwards precedent will weigh heavily on any attempt to try that kind of case a second time, and likely will convince the DoJ to take a pass on it. If Democrats want to make hay on the Cohen tape, they’ll need to nominate someone a lot cleaner than a Clinton to challenge Trump in 2020.