Things are objectively getting better in the world, but people in many developed countries remain pessimistic 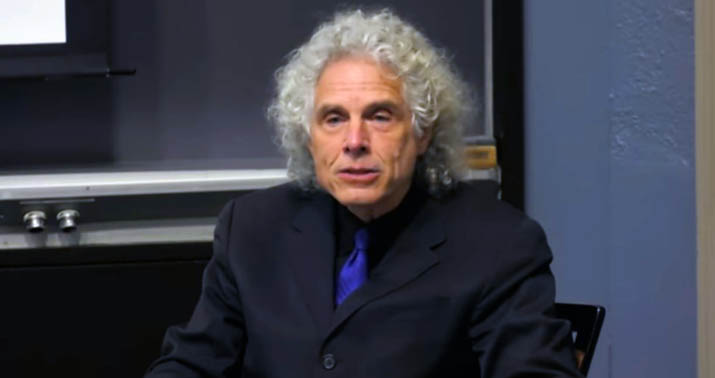 The New Yorker has an interesting piece over the weekend titled “Are Things Getting Better or Worse?” The piece is largely based on a recent book by Steven Pinker (pictured above) titled “Enlightenment Now: The Case for Reason, Science, Humanism, and Progress.” The gist of Pinker’s argument is that, by almost any measure, things are better now than they were even in the relatively recent past. But, curiously, that’s not how a lot of people see it. In fact, people in some of the better-off parts of the world appear to be the ones who are most pessimistic about how the world is doing. Pinker argues this pessimism is wrong-headed and maybe dangerous:

In “Enlightenment Now: The Case for Reason, Science, Humanism, and Progress,” the cognitive scientist Steven Pinker looks at recent studies and finds that majorities in fourteen countries—Australia, Denmark, Finland, France, Germany, Great Britain, Hong Kong, Malaysia, Norway, Singapore, Sweden, Thailand, the U.A.E., and the United States—believe that the world is getting worse rather than better. (China is the only large country in which a majority expresses optimism.) “This bleak assessment of the state of the world is wrong,” Pinker writes—and not just a little wrong but “wrong wrong, flat-earth wrong.”…

With “Enlightenment Now,” Pinker hopes to return us to reality. In the course of five hundred pages, he presents statistics and charts showing that, despite our dark imaginings, life has been getting better in pretty much every way. Around the globe, improved health care has dramatically reduced infant and maternal mortality, and children are now better fed, better educated, and less abused. Workers make more money, are injured less frequently, and retire earlier. In the United States, fewer people are poor, while elsewhere in the world, and especially in Asia, billions fewer live in extreme poverty, defined as an income of less than a dollar and ninety cents per day. Statistics show that the world is growing less polluted and has more parks and protected wilderness. “Carbon intensity”—the amount of carbon released per dollar of G.D.P.—has also been falling almost everywhere, a sign that we may be capable of addressing our two biggest challenges, poverty and climate change, simultaneously.

Pinker cites statistics showing that, globally, there are now fewer victims of murder, war, rape, and genocide. (In his previous book, “The Better Angels of Our Nature,” he attributed this development to a range of causes, such as democratization, pacifism, and better policing.) Life expectancy has been rising, and—thanks to regulations and design improvements—accidental deaths (car crashes, lightning strikes) are also in steep decline. Despite what we’re often told, students today report being less lonely than in the past, and, although Americans feel overscheduled, studies show that men and women alike have substantially more leisure time than their parents did (ten and six hours more per week, respectively).

So if things are going so well, why do so many people in the developed world feel pessimistic about the present? The answer, according to Pinker, has a lot to do with the media:

Pinker mentions various sources of pessimism—the “progressophobia” of liberal-arts professors, for instance—but directs most of his opprobrium toward the news media, which focus almost entirely on of-the-moment crises and systematically underreport positive, long-term trends. (Citing the German economist Max Roser, Pinker argues that a truly evenhanded newspaper “could have run the headline number of people in extreme poverty fell by 137,000 since yesterday every day for the last twenty-five years.”) He consults the work of Kalev Leetaru, a data scientist who uses “sentiment mining,” a word-analysis technique, to track the mood of the news; Leetaru finds that, globally, journalism has grown substantially more negative.

The power of bad news is magnified, Pinker writes, by a mental habit that psychologists call the “availability heuristic”: because people tend to estimate the probability of an event by means of “the ease with which instances come to mind,” they get the impression that mass shootings are more common than medical breakthroughs. We’re also guilty of “the sin of ingratitude.” We like to complain, and we don’t know much about the heroic problem-solvers of the past.

There’s a lot more to the piece, but that’s the central question it asks. Why are we so pessimistic despite evidence to the contrary? Secondarily, will that pessimism become a self-fulfilling prophecy?

Here’s my pure speculation on these big questions. The news media is frequently pessimistic because there are partisans on each side of various debates who are trying to stir concern about the dire consequences of ignoring their issue or giving power to their opponents. This leads to people using worst-case scenarios and scare tactics as a way to win people over.

The most obvious example is probably climate change. This is a vision of humanity’s imminent demise which we are constantly reminded is almost beyond fixing and entirely our fault. Not only that, but it’s our capitalism and conspicuous consumption which is held most responsible for our inevitable decline. So the historical forces that have raised billions of people out of poverty are also going to lead to our demise. It’s an extremely pessimistic view.

And yet, even the people most convinced of our imminent doom don’t really live as if it’s true, not for the most part anyway. Think of all the anti-capitalists planning marches on their $700 cell phones. Or think of the celebrities who talk about climate change while jetting around the world for film premieres. There’s some evidence that the people who talk more about such issues do less than those who talk less about them. It’s a phenomenon known as moral licensing. Basically, those who talk a good game feel they’ve done their part and earned a little reprieve from the actual doing. It’s similar to people who went to the gym in the morning deciding they deserve a little ice cream before bed.

Now multiply this by all the other pressing issues that people in the modern world are supposed to be very aware of and perpetually concerned about: Racism, sexism, hunger, violent extremism, etc. All of that is a heavy load and every day there’s a new raft of stories about how all of these problems are terrible and not getting better. Again, I think that’s partly because the people who make a living talking about these problems want to make sure we don’t miss the next chapter in the endless story that is their cherished issue. That’s partly because they do care but probably partly because it made them famous, important, and in some cases wealthy.

So add all of that together and then multiply all of the additional hypocrisy of people who hold the right opinions on various things but don’t really do much about any of it personally. They genuinely believe it’s important but are aware on some level they’re not living up to the standards they set for others. I think that dynamic leads to a lot of internal pessimism. Not only do things seem bad externally, but there also seems to be no way any individual can really do what it takes to make things better. In a word, it’s hopeless.

I think that’s why you wind up with so many people in relatively well-off, well-educated countries convinced that things are going to be worse in the future. Everyone’s concerned but also everyone’s a hypocrite and knows that everyone else is, to some degree, a hypocrite too. So, of course, in such an environment the person who argues that ‘hey, things aren’t really so bad’ seems like the worst kind of simpleton. He’s either uninformed about the pressing issues or he’s dumb enough to not realize he’s a hypocrite about the pressing issues. Either way, he’s probably someone who should be ridiculed.

And the real irony, as Pinker and Jonah Goldberg both have pointed out, is that what’s probably lacking most is some real education about the tremendous leaps we’ve made toward making the world a much better place for billions of people. Because if we were more cognizant of how amazing it is we’ve made it this far, we might feel something like gratitude about our own past and with that at least a little more optimism about what comes next.