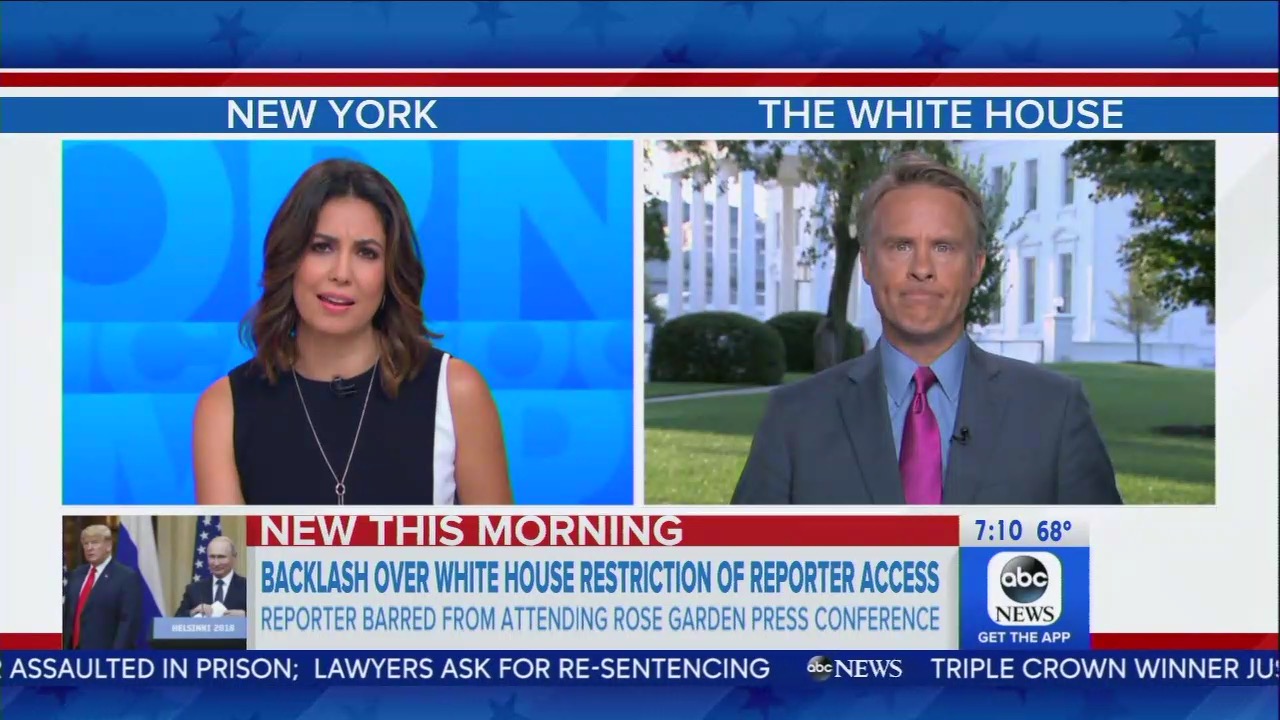 As reported yesterday, the White House is facing backlash after banning CNN reporter Kaitlan Collins from a presser in the Rose Garden yesterday, after she had yelled questions to the President during a pool spray about the leaked Michael Cohen tape. Thursday morning the journalists on ABC’s Good Morning America melted down over the news complaining that this was a “shocking” and “unprecedented” attack against the First Amendment.

Speaking to foreign correspondent Terry Moran at the White House, fill-in anchor Cecilia Vega asked Moran about the administration “banning one of our colleagues from CNN” because they “didn’t like the questions she asked earlier in the day.” Moran filled in the details, explaining that CNN’s Kaitlan Collins was chosen to represent the television networks for a White House event with EU president Jean-Claude Juncker, but was told she couldn’t come to the press event later in the day, after she had shouted questions about Russia and the leaked Cohen tape.

“The president and his staff apparently perturbed,” Moran noted, adding that it was a “very rare move” to “ban someone” because “you don’t like what they’re saying.” The ABC reporter noted that there was unanimous support from the rest of the networks for Collins, including from Trump’s “favorite network, Fox News.”

Vega applauded the press unity over the issue, claiming this was “unprecedented, George, as you know,” she said turning to anchor George Stephanopoulos.

“This reporter did nothing wrong. This was her job. This is our job to represent all of the journalists at the White House when we go into these poll sprays. These questions were about the news of the day,” she gushed.

Stephanopoulos agreed, calling the questions about the Michael Cohen tape, “Pretty straightforward.” An irate Vega ranted again, “And this is just not what you do in a country that values the First Amendment. It’s pretty shocking!”

Turning to Martha Raddatz, Stephanopoulos connected another story to Trump’s “attack on the First Amendment.” He complimented her recent article lamenting the treatment of the press at a recent event with President Trump, where he apparently turned the crowd of veterans on the press. Raddatz complained that the press has always supported and been on the front lines with veterans, so this was “very disturbing” to hear:

GEORGE STEPHANOPOULOS: Pretty surprising and also escalation in the attacks on the press. I want to bring in Martha Raddatz on that and this comes a couple days after you wrote a powerful piece in "The Washington post" after the president went to the veterans of foreign wars and convention, kind of goaded the crowd with attacks on the press.

MARTHA RADDATZ: He sure did George. It is relentless and he does not care who the crowd is. Those veterans take an oath to support and defend the constitution, so it was very disturbing to watch some of the veterans boo the press when the president told them not to believe the press. Reporters have been at the side of the military in war with many of them injured or killed. This can have a profound effect on how some Americans view the media no matter whether they cover politics or war, George.

The GMA report was skimping on some details. ABC didn’t provide the White House’s statement for their report and didn’t note that while Collins was banned from that specific event, other CNN reporters were allowed to attend.

Despite the outrage, banning reporters from press pools or refusing to call on them during press conferences is not unprecedented, as ABC claimed. As Fox News reporters like Bret Baier rallied around Collins yesterday, they pointed out that their own network was frequently blocked by President Obama when he was in office. It seems the media’s only outraged when a liberal network’s not given access by the president.