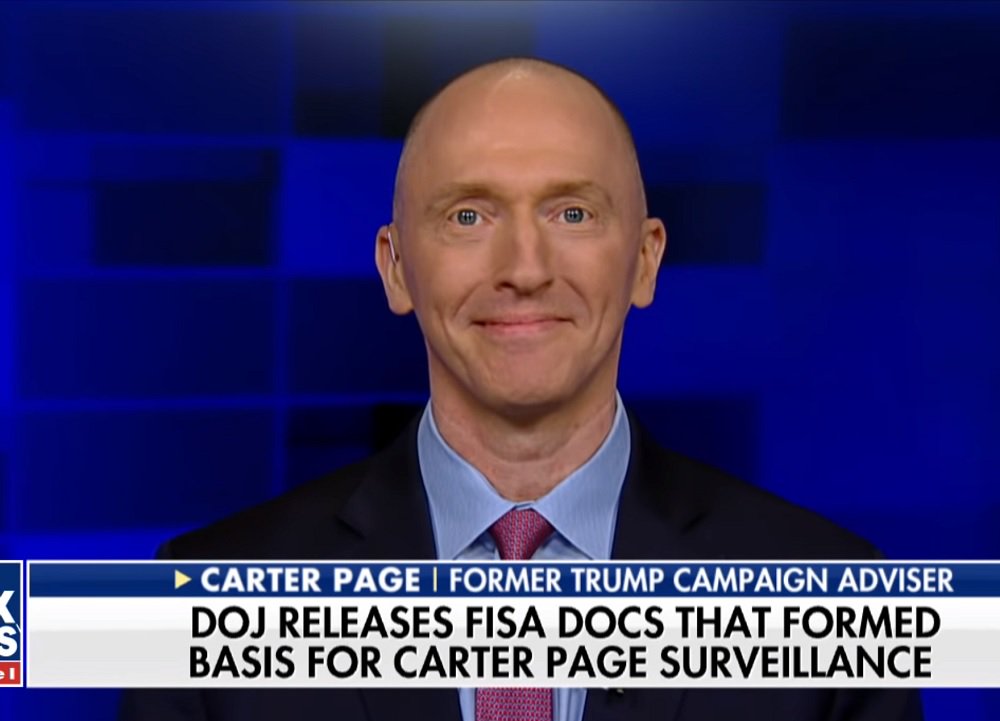 On Saturday night, heavily redacted copies of the FBI’s application to wiretap Trump campaign affiliate Carter Page were released. The portion of the 412-page document that was not redacted supported the claims of Sens. Chuck Grassley (R-Iowa) and Lindsey Graham (R-S.C.), as well as those made by the majority of the House Permanent Select Committee on Intelligence.

The senators and the representatives had issued reports alleging that the FBI used an unverified Clinton campaign document to secure a wiretap against an American citizen, that the application for the wiretap used circular reporting and lacked verification for its central claims, and that it made materially false claims related to the source’s credibility.

President Trump tweeted triumphantly and hyperbolically about what the documents showed regarding the FBI’s behavior toward his campaign. Whatever you think about Trump’s reaction to the release of the FISA application, the media reaction to the story was disingenuous and even more hyperbolic than the president’s tweets. After a year of continuous and alarming revelations, the media are still more interested in proving the Trump campaign treasonously colluded with Russia than wrestling with the fact that the FBI spied on a presidential campaign, and used dubious partisan political research to justify their surveillance.

The New York Times went with both “Without Evidence, Trump Claims Vindication From Release of Carter Page Documents” and “How a Trump Decision Revealed a G.O.P. Memo’s Shaky Foundation.” The latter headline was in reference to the House Intelligence report. The accompanying article completely ignored the criminal referral from Graham and Grassley that buttressed the HPSCI allegations.

When Facts Get In The Way Of Narratives

This is part of a pattern for the media when they encounter facts related to the surveillance of the Trump campaign. When Department of Justice officials leaked to the media that they had run at least one informant against the Trump campaign, a breathtaking admission by any sense of news judgment, the news was buried in the middle of the story and completely downplayed.

Others joined in with the gaslighting, spending weeks arguing — and I’m not joking here — that running a secret government informant against a campaign is not spying on a campaign.

The Times headline was — hand to God — “F.B.I. Used Informant to Investigate Russia Ties to Campaign, Not to Spy, as Trump Claims.” CNN contributor and Obama director of national intelligence James Clapper told the viewing audience that actually “it was a good thing” that Trump’s campaign was spied on. A Washington Post journalist wrote in defense of obscuring the spying: “Trump’s win: We’re debating a ‘spy,’ not an ‘informant.’”

Still, he called it the definition of fake news and compared it to believing in ghosts.

32 percent of the public thinks President Obama intentionally spied on Donald Trump and members of his campaign and 52 percent of Republicans believe this charge. A charge that there is literally no evidence to support. It is the definition of fake news.

Now, look, this is America and you can believe whatever you want to believe. 18 percent of the public says they’ve seen or been in the presence of a ghost. I mean whatever. But in a thriving democracy, truth matters and facts matter.

Again, this segment aired weeks after CNN itself reported that the Obama administration had secured a wiretap to spy on Page.

What We Know of FBI’s Trump Campaign Surveillance

Sometimes it’s good to take a step back from a complicated story and view it from a distance. Rather than think about whether the wiretap application against Carter Page supports this party or that party, let’s just take a moment to reflect on where the story stands.

In January 2017, days before Trump’s inauguration, high-level intelligence officials leaked to CNN the news that “Intel chiefs presented Trump with claims of Russian efforts to compromise him.” The Hillary Clinton campaign had latched onto “Russia” as an explanation for her loss, encouraging a largely compliant media to hype up reports of Russian meddling in the election.

This leak enabled the media to discuss the “salacious and unverified” (in former FBI director James Comey’s words) gossip that was in a dossier. For the next year and many months into this year, this leak and other leaks from intelligence officials fed a theory that President Trump was a traitor who had conspired with Russia to steal the election from Hillary Clinton.

A few lonely skeptics of the Grand Russia Theory began asking questions about the dossier, its provenance, its weaponization, and the larger investigation into the Trump campaign. Fighting against an incredible media onslaught, they discovered things the media and their cadre of leakers had not shared with the American public. And they’re important.

1. Hillary Clinton and the DNC Secretly Paid for the Dossier

It turned out to have been secretly bought and paid for by Hillary Clinton and the Democratic National Committee. They took extreme care to cover their tracks by funneling the money through a law firm that hired the Democratic researchers to cook up the dossier. The research product was then funneled to the media and the federal government.

Republican investigators found this out over the strenuous objections and process wrangling of Democratic members such as Rep. Adam Schiff, who fought tooth and nail to keep the funding of the dossier hidden. This information was leaked to friendly media only under pressure from congressional investigators.

This fact of the funding was obscured, just as the HPSCI report said, by the FBI in a page-long word salad when they applied to a secret court to wiretap a Trump affiliate. It was obscured so well that Comey, who signed one of the applications, could get away with claiming he had no idea that Clinton and the DNC funded the dossier.

2. The Dossier Was Used to Secure a Wiretap Against a Trump Affiliate

When CNN received its leak about the dossier from highly placed intelligence officials, it reported as if the dossier was a legitimate piece of research that sober-minded intelligence agencies took very seriously. The unintentional hero of the story was BuzzFeed, which ran the actual dossier in all its glory.

Americans learned that the dossier claimed a senior advisor to Trump and three of his colleagues had met with Kremlin operatives in Prague in late August or early September to undermine the Clinton campaign. They also learned the Russians had a file of “kompromat” on Trump, including an amazing story about him renting a hotel room that the Obamas had used and paying prostitutes to urinate on the bed.

People could see for themselves how ridiculous, preposterous, and immediately debunkable some of the most important claims were. The revelation of how fever-dreamed and sophomoric the dossier was, at least in major parts, cast doubt on the wisdom of the top political brass at intelligence agencies, much less their propriety and ability to handle information with any discretion. Obviously they were leaking like sieves in an ongoing war against the president-elect.

Trump critics say that since Page wasn’t on the Trump campaign at the time of the wiretap, it wasn’t really surveillance of the campaign. There are multiple problems with that. One is that wiretaps can be used to obtain information into the past, of the time Page was on the campaign. Another is that the wiretap would capture communications with any Trump campaign members Page spoke with. Another is that the FBI itself claimed in its wiretap application that Page was the conduit between Russia and the campaign.

The case against Page laid out in the wiretap application began with an unverified claim pulled straight out of the dossier. When Page responded to public reporting of the dossier’s claims by denying it, that was also mentioned in the application. The geniuses at the FBI wrote that they don’t believe the news reports of the dossier claims were fed by the dossier author, all evidence to the contrary.

3. Informants Were Run against the Trump Campaign

For most Americans, the idea that the FBI would run human informants against the Republican Party’s presidential campaign is a huge scandal. It happened, according to government leakers who told friendly media outlets. Again:

If the FBI genuinely believed that Russians were trying to illegally infiltrate the Trump campaign, the proper course of action would be to give the Trump campaign a defensive briefing warning them of the efforts. To run human informants, wiretaps, national security letters, and other surveillance against the campaign is truly breathtaking and invasive.

4. The FBI Also Used Secret Subpoenas Against the Trump Campaign

From the same excerpt above:

You can, along with the partisan and gaslighting media, claim it’s not a big deal to run human informants or secretly gather intelligence against a presidential campaign. But you can not deny it happened.