Russia Has Become an Unusual Broker in Golan Heights 2.0 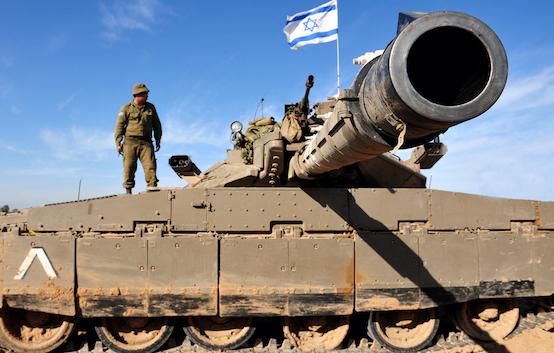 A Syrian fighter jet was shot down Tuesday afternoon by the Israeli Air Force, which claimed the plane had penetrated Israel’s airspace near the Golan Heights. Syrian officials say the jet crashed in southwestern Syria, and was hit while engaged in raids in their airspace over an area known for ISIS activity.

Tensions are clearly running high and the incident offers the most recent evidence that a new post-civil war phase of the Syrian conflict is well underway, with its center the disputed Golan Heights territory between the two countries.

This is the second time in a week that the Golan has pushed its way into the international news cycle. During the now-infamous joint press conference in Helsinki, Russian President Vladimir Putin made the case for a restoration of peaceful Israeli-Syrian relations on the Golan plateau. “The south of Syria should be brought [into] full compliance with the treaty of 1974 about the separation of forces [between] Israel and Syria,” he said, adding, “this will bring peace to [the] Golan Heights and bring a more peaceful relationship between Syria and Israel,” while also ensuring the “security of the state of Israel.”

Amid the predictable hubbub over Russian spies, electoral meddling, and NATO, this seemed to come out of nowhere. So much so that the mainstream press, obsessed as they were with the more buzz-worthy details of the summit, dropped it immediately from their round-the-clock coverage.

But why this renewed interest in Golan Heights, and why did Putin and Trump feel compelled to add it to their most pressing items on the Helsinki to-do list?

The reason is that, in Syria, Humpty Dumpty is indeed coming back together again. Every day brings more evidence that the Assad regime is restoring an uneasy national authority over the width and breadth of the country, large segments of which have been outside state control since 2011. Last week, the Deraa and Quenetra regions—Syria’s southern frontier with Israel—became the latest of the territorial prizes won back by the regime with critical support from Russia. That’s your first clue.

As the defeat of Assad’s opponents progresses, the issue of this borderland between Israel and Syria must be sorted out, not because of the need to resume trade—which never existed—or to return refugees—none of whom were ever welcome in Israel—but, as Putin explained, to rehabilitate the uneasy peace that has kept Syria’s border mostly quiet for almost half a century. (Not surprisingly those aren’t the only motivations at play here. More on that in a bit.)

That is why the Helsinki resurrection of the UN-mandated status quo ante, with important support from Moscow and Washington and including de facto restrictions on the deployment of the “resistance axis” forces—Iran and Hezbollah opposite Israel—is so noteworthy.

Notwithstanding the fact that Israel and Syria are bitter enemies, Netanyahu and Assad agree that as they plan for the future, they should look back to the 1974 Disengagement Agreement as the new old foundation for Syria’s postwar relations with Israel.

These understandings formalized the ceasefire that ended the October 1973 War and left Israel in control of a sliver of Syrian territory initially occupied during the June 1967 war. The UN Disengagement Observer Force (UNDOF), numbering close to 1,000, was created “to maintain the cease-fire and to see that it is scrupulously observed.”

For most of its 44-year history UNDOF has performed this task without incident. Whatever else they did, both Syria and Israel were at pains to honor the limitations along the frontier. Every six months, most recently in June, the UNSC has reauthorized its mission.

Since August 2014, however, the peacekeeping mission, and more broadly the set of understandings that underpin the system, has been reduced to a shadow of its former self. When the regime lost control of the border region to a motley assortment of opposition and jihadi factions, the UN monitoring system—from patrols to observation posts along the frontier—broke down almost completely. The inability of UNDOF to perform its mission reflected the anarchy that had engulfed all of Syria. Along the frontier it was every man for himself. Both Israel and Syria, not to mention an array of non-state actors battling the regime, regularly violated the terms of the 1974 agreement by moving prohibited forces and arms into the area of separation and the areas of limitation along the frontier. UNDOF, chased from its observation posts and consumed with its own protection from opposition forces, became a metaphor for the breakdown throughout the country and the dangerous vacuum created by the implosion of an agreement designed to prevent a general war between Israel and Syria.

The regime’s crushing of the opposition along the frontier these last weeks has forced the question of how to address postwar deployments, and more broadly of an Israel-Syria ceasefire regime, onto the international agenda. In consultations with Moscow, the Netanyahu government has declared its interest in reaffirming the 1974 agreement. For the first time in years Israeli statements declare that “[Israel] will continue to implement the 1974 Separation of Forces Agreement that includes maintaining the buffer zone.”

In Moscow, Netanyahu noted that Israel had had no problem “with the Assad regime for 40 years,” and noted that “not one bullet was fired on the Golan Heights” in that time.

The resuscitation of the 1974 agreement is one facet of Israel’s postwar agenda. The other is a diplomatic offensive to obtain Washington’s recognition of its sovereignty over the occupied Golan Heights. In contrast to the era that ended with the war’s outbreak in 2011, the Netanyahu government sees no need to engage diplomatically with Damascus on the question of Israel’s withdrawal from the contested area, where more than 25,000 Israeli settlers (and an equal number of Syrians) live. At the very least, the Israeli effort to win a unilateral declaration of support from the Trump administration serves to preempt other efforts to establish a diplomatic agenda not of Israel’s making.

Assad, who has defied those who questioned the regime’s ability to defeat its enemies on the battlefield, supports the 1974 agreement as a pillar of the restoration of Syrian sovereign control over its borders. The force limitations in the agreement also have the indirect benefit of constraining efforts by Hezbollah or Iran to deploy in force opposite Israel.

Moscow has emerged as a critical player in waging war on the regime’s behalf and mediating and guaranteeing the emerging postwar system along the frontier. The ongoing Russian air campaign remains critical to Assad’s success and to the associated decision to keep Hezbollah and Iranian forces far away from the battle. Russian-sponsored “reconciliations” are a key factor in arranging the surrender of opposition forces. Putin has performed a key intermediary role in winning Israeli and Syrian support to reconstitute the peacekeeping system—including UNDOF and arms limitations restrictions in well-defined disengagement zones.

The new Russian role is not only diplomatic but operational. For the first time Russian “police” forces will deploy onto the Golan to guarantee the new system.

According to the Russian-sponsored agreement, the Syrian army’s Brigades 90 and 61 as well as the Russian police will deploy in the ceasefire line and the demilitarized area of separation zone—under Syrian civil authority according to the 1974 agreement.

The 1974 Agreement, however, made no mention of Russian (Soviet) forces on the Golan. Indeed, Washington and Jerusalem during the Cold War would have vehemently opposed such a suggestion. Today, however, is a new day. Washington has been all but sidelined in both the diplomatic and operational efforts to end the war and reconstitute the peace.

Geoffrey Aronson is chairman and co-founder of The Mortons Group and a non-resident scholar at the Middle East Institute.