Ted Cruz to Beto O’Rourke: You and me — five Senate debates 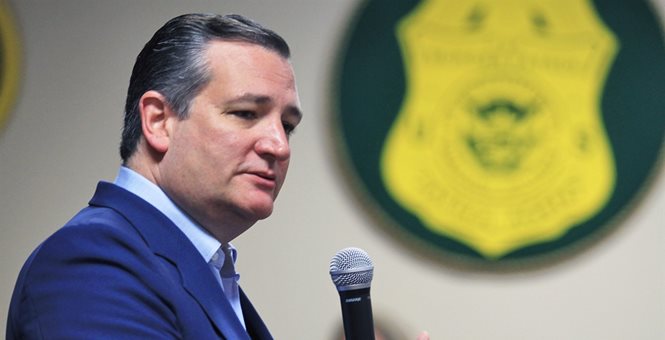 Not super risky. Not even very risky.

But a bit of risk, sure:

Sen. Ted Cruz challenged his Democratic rival to five one-hour debates on Wednesday, offering a bold counterstroke to Rep. Beto O’Rourke’s sniping that he had been ducking head-to-head confrontation…

“I am encouraged that Sen. Cruz has decided that he’s ready to debate the issues. Our campaign looks forward to working with his campaign to finalize mutually agreed upon details,” O’Rourke said in a statement issued through an aide…

The proposed topics include many areas where Cruz might feel he has a natural advantage, including taxes, trade, foreign policy and the Supreme Court. There are many contentious issues on the list, too, such as health care and immigration. Gun violence is a notable omission.

The Texas Tribune has the dates and suggested topics for all five debates. September 14, which would deal with immigration, promises to be a barnburner. Back in April O’Rourke proposed six debates with Cruz, with two to be conducted in Spanish. Cruz rejected that idea on grounds that his grasp of the language simply isn’t good enough but he’s been coy even about debates in English, for understandable reasons. It’s standard practice for a lesser-known challenger to dare an incumbent to debate him, and it’s standard practice for the incumbent to ignore that dare. Why give a free microphone to a guy whom many voters have never heard of? Name recognition is a crucial advantage. Debates reduce that advantage.

But Cruz is now all-in. And Obama alum Dan Pfeiffer thinks he knows why.

This is a sign that Ted Cruz's internal numbers are not headed in the right direction https://t.co/UMrxd1THMW

Meh, I doubt it. Cruz leads by an average of more than eight points at RCP, not remotely a landslide for a Senate race in Texas but a comfortable lead. If he’s worried about numbers related to O’Rourke, it’s likely not his polling. It’s his fundraising, which has reached juggernaut proportions. Liberals really, really, really want to beat Ted Cruz and they’re giving O’Rourke the cash he’ll need to have an outside shot at doing that. Cruz may have concluded that the race is competitive enough that he just can’t duck a challenger with this much dough and hope to win by default in a red state. He’s going to have to land some shots.

Contra Pfeiffer, I think Cruz has a strategic and not-so-strategic reason for getting in the ring with O’Rourke. The not-so-strategic one is pure, undistilled hubris. He won national championships in debate in college, he’s won cases before the Supreme Court, he won himself a Senate seat in Texas at the tender age of 42, he might well have won the Republican nomination in 2016 if not for Trump’s entry into the race. He debates Bernie Sanders on CNN periodically for sport. He’s supremely confident in his abilities, with some justification. Telling him not to debate for fear he might lose is like telling an NBA all-star not to play someone one-on-one for fear that he’ll get blown out. It’s an affront to the very core of his ego.

But there’s a strategic reason too and it has nothing to do with Cruz’s internal polling. You need to remember that O’Rourke has been running in Texas as a loud-and-proud liberal for the most part. That’s one major explanation for his fundraising: It’s not just that he’s opposite Cruz, it’s that he’s running as an unapologetic progressive. That seems counterintuitive in a state like Texas, but O’Rourke’s calculating that he’ll need massive Democratic turnout to have any chance against Cruz and he’s more likely to get that turnout by running as the sort of Democrat who makes other Democrats feel enthusiastic. That being so, Cruz may be calculating in turn that raising O’Rourke’s profile will do the challenger more harm than good among Texas’s center-right swing voters. If O’Rourke remains largely anonymous to casual voters, there’s a chance that they’ll go to the polls on Election Day and tilt towards him on the assumption that he’s not very liberal. (He’s a Texan, isn’t he?) They may be lukewarm about Cruz and/or about Trump and inclined to send the GOP message by voting for a “centrist” Democrat instead. Cruz’s task, then, is to show those voters repeatedly that O’Rourke’s not a centrist. Hold five debates and hand him as much rope as he wants to hang himself by reiterating his progressivism. Those center-right voters, observing that he’s a true blue liberal, will in the end break for the right-winger Cruz instead. That’s the play Cruz is making here, I think. Sure hope it works out.