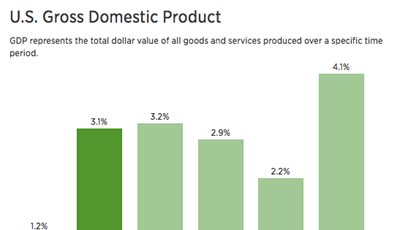 Get ready for some bragging from the White House today. The US economy had a breakout second quarter with annualized GDP increasing by 4.1%. It’s the best quarter in more than four years, and the first time GDP has gone over 3% since 2015:

Real gross domestic product increased at an annual rate of 4.1 percent in the second quarter of 2018 (table 1), according to the “advance” estimate released by the Bureau of Economic Analysis. In the first quarter, real GDP increased 2.2 percent (revised).

The Bureau emphasized that the second-quarter advance estimate released today is based on source data that are incomplete or subject to further revision by the source agency (see “Source Data for the Advance Estimate” on page 2). The “second” estimate for the second quarter, based on more complete data, will be released on August 29, 2018.

The increase in real GDP in the second quarter reflected positive contributions from personal consumption expenditures (PCE), exports, nonresidential fixed investment, federal government spending, and state and local government spending that were partly offset by negative contributions from private inventory investment and residential fixed investment. Imports, which are a subtraction in the calculation of GDP, increased.

The topline number will certainly come as welcome news to Republicans and the White House. The Trump administration’s political standing relies almost entirely on its ability to deliver impressive economic growth and job creation, and it’s the one issue on which the GOP broadly and enthusiastically aligns with Donald Trump. At least in this quarter, the partnership has paid off.

Some may be surprised to see this kind of growth, considering that Trump began his trade wars with China, the EU, and Canada and Mexico midway through it. That may be one reason why Q2’s GDP shot up so high, however. Exports had their best quarter in five years, shooting up 9.3%, offset only by a 0.5% increase in imports. It appears that overseas consumers may have front-loaded their demand to get their purchases made before the reflexive tariffs got applied. That would create an artificial boost to GDP, one that may not last long if the trade wars don’t get settled soon.

Without that big export boost, the GDP might have looked somewhat different. Perhaps not that much different, though. Consumer spending rose by 4.0%, the best increase in four years too, but private investment dropped by 0.5%. That may have been expected after a big boost in private investment last quarter, but again hints that there could be choppy waters ahead.

One good hint at solid, sustainable growth is in the 4.3% annualized growth in final sales to domestic purchasers, which strips out inventory changes from the topline GDP number. The increase didn’t come from a broad refilling of inventory shelves, which means that it’s not a short-term bubble in Q2 — products really did move off the shelves.

The sirens went off at CNBC, and for good reason, but they also provided some historical context:

That’s the fastest rate of the growth since the third quarter of 2014 and the third-best growth rate since the Great Recession. In addition to the strong second quarter, the Commerce Department revised its first-quarter reading up from 2 percent to 2.2 percent. …

The next question will be whether the growth spurt is sustainable. There were several jumps in GDP under former President Barack Obama. That Q3 increase in 2014 was preceded by a 4.6 percent rise in the second quarter. But by the end of 2015, growth had slowed to 0.5 percent. Federal Reserve officials forecast GDP to rise 2.8 percent for all of 2018 but then to tail off to 2.4 percent in 2019 and 2 percent in 2020.

Sustainability is the key issue. The final-sales number and the PCEs seem to indicate that this does have staying power, but that will depend on what happens in trade disputes and whether higher prices force consumers to pull back on purchases. One thing’s for sure — Democrats will have a very tough time selling a 4.1% GDP result as “crumbs,” or as evidence of a failing economy.

Donald Trump plans to speak at 9:30 ET about the Q2 results. Call it a victory lap.