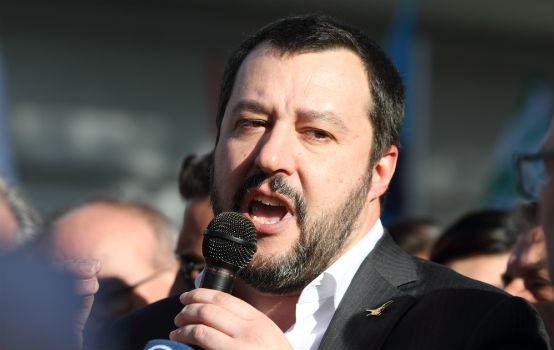 A new left-right populist government has taken power in Rome, fueled by popular anger over illegal immigration and adept in its use of social media. The M5S/Lega, as it’s known, wants debt forgiveness and new spending as the price for Italy remaining within the eurozone. A number of observers blame German Chancellor Angela Merkel for this populist lurch, which every day makes Italy seem like a larger Greece.

“The backlash in Italy is another predictable (and predicted) episode in the long saga of a poorly designed currency arrangement,” argues Joseph Stiglitz, “in which the dominant power, Germany, impedes the necessary reforms and insists on policies that exacerbate the inherent problems, using rhetoric seemingly intended to inflame passions.”

Former Greek finance minister Yanis Varoufakis, when asked about unkind comparisons in the German press between himself and Rome’s new finance chief, stated:

I wanted to keep Greece in the eurozone sustainably and was clashing with Germany’s leaders in favor of the debt restructuring that would make this possible. By crushing our Europeanist government in the summer of 2015, Germany sowed the seeds of today’s bitter harvest: a majority in Italy’s parliament that dreams of exiting the euro.

Of course, blaming the Germans for Italy’s financial dysfunction gives the great peoples of northern Europe far too much credit. Since the early days of Rome, Italy has been invaded and pillaged more than, and by most of, the major nations in the region. This chaotic history left behind an unstable legacy when it comes to matters of state finance and democratic governance.

In 1848, as much of Europe was experiencing violent social revolution, Rome and the rest of Italy was engulfed in political chaos and civil war. With the self-exile of Pope Pius IX from Rome to Naples in November of that year, the temporal rule of the Church over the Papal States on Italy’s western coast ended. The first modern republican state in Italy emerged suddenly with little preparation. Rome almost immediately fell into a financial crisis.

Christopher Clark, writing in the London Review of Books, describes the very liberal Republic of Rome that arose after the collapse of the sovereignty that the popes had wielded in central Italy since 754 AD:

[T]here was something unreal about the whole project. As people with money fled the capital, the republic was forced to subsist on debased republican coinage and inflated banknotes elegantly inscribed with eagles, fasces and cannonballs. If money was scarce, celebrity was not. The luminaries of the worldwide Italian insurrectionary networks descended on Rome.

As with the decadent Italy of 170 years ago (and also today), in the United States, celebrity has come to play an increasingly important role in public life. Yet unlike the relatively new Americans, Italians have been wallowing in a state of political disarray for millennia. After more than a hundred years of foreign occupation and war, China emerged a strong, centralized, and authoritarian state during the 20th century. Yet Italy never rebounded from those centuries of foreign subjugation and violence.

Following the Franco-German invasion of Italy in the late 1400s, successive popes in Rome regained control over the Papal States in central and northern Italy, culminating in the relatively stable rule of Sixtus V (1585-1590) and Clement VIII (1592-1605). Over the next two centuries, however, Italy was more of a geographical expression than a country, politically divided and for the most part under foreign rule. When the French occupied Rome in 1808, Napoleon captured the Pope and declared the Papal States to be French soil.

Thus began the transition from what was effectively a theocracy in Italy prior to 1848 to a reasonably united republic, at least by Italian standards. Through about 1871 when Rome was named the capital, Italy had a measure of stability under a variety of colorful strongmen, but a truly enduring democratic republic never really took root. With the exception of the Piedmont, which retained its liberal constitution and became the great hope of Italian reformers, the rest of Italy was subjected to irredentist tendencies that agitated for war with Austria and France.

The failure of liberal democracy in Italy in the late 1800s set the country on a course that ended with the fascism of the 1920s and the political chaos of the post-World War II period. Carmen Reinhart and Kenneth Rogoff remind us in their essential 2009 work “This Time Is Different: Eight Centuries of Financial Folly” that modern Italy continued to struggle with external threats and violent internal instability.

In 1866, for example, the National Bank suspended convertibility of the Italian lira due to “the impending Austro-Prussian War.” Italy saw a serious banking crisis in the 1880s, then a real estate boom and bust and a tariff war with France in the 1890s. By 1900, the Italian Republic was engaged in a costly colonial adventure in Africa that nearly brought it to the brink of war with France. The Rome government also conducted a wholesale restructuring and bailout of the banking system in 1893.

The financial stresses of World War I would require yet another series of bank rescues and sovereign debt restructurings in 1914. At the end of the war, President Herbert Hoover notes in his memoir, Italy received the largest concession from the United States in terms of forgiveness of war debts, some 70 percent of the face amount. And yet by 1921, the third and fourth largest banks in Italy were insolvent due to war-related trading and required bailouts.

The fascists took control of Rome in 1922 and Benito Mussolini was named prime minister. By 1925, Mussolini was dictator of Italy. The country quickly slid into another financial crisis in 1930, when the government had to again nationalize a number of banks and take over bad loans. During the depths of the Great Depression in 1935, Italy saw additional bank closures and government-assisted mergers “to such an extent that the Italian banking system appeared completely reorganized,” write Reinhart and Rogoff.

The 1930s saw the rise of state socialism in Italy as an alternative to republican forms of government. The shared consensus among political leaders in Washington, Berlin, Rome, and Moscow during the 1930s was that the world was in a period of consolidation from unpredictable capitalism to a managed post-liberal welfare state. By 1933, with the election of the National Socialists in Germany, the liberal democratic state as a political archetype was essentially dead and various flavors of fascist “new deals” flourished around the globe.

Many of the statist and collectivist attributes of FDR’s New Deal were inspired by the constructs of Italian fascism. But the years of genocide and war did not move Italy closer to stability. After the Depression and World War II, Italy was rebuilt by the Marshall Plan as well as, during the Cold War, copious amounts of American assistance aimed at preventing the rise of a communist government in Rome. Yet that’s precisely what occurred.

The author Alexander Stille writes of the current situation in The New York Review of Books:

In the early 1990s Italy’s GDP equaled or even surpassed that of Great Britain, making it the world’s fifth-largest economy. This was all the more remarkable given that the cold war had frozen Italian politics; the presence of the largest Communist Party in Western Europe had prevented the normal alternation of left and right governments. This led to virtual one-party rule by the Christian Democrats, a deeply entrenched patronage system, and widespread corruption. However, the European Union’s standardization of currency and a nationwide investigation into political corruption were expected to rein in government profligacy and waste, strengthen democracy, and encourage economic prosperity. This did not happen.

Including Italy in the eurozone was a supreme act of optimism. Italy today is a failed state within the European Union, a ticking fiscal and political time bomb that cannot be defused short of expulsion. In Rome, we have a coalition government between a southern party led by a former comedian, Beppe Grillo, who virtually overnight and via social media constructed one of the largest political movements ever seen in Western Europe, and a far-right northern party that is hostile to the EU and immigrants, and once advocated the secession of the northern regions of Italy. If you think this sounds like a replay of the Italian politics of 500 or even 1,000 years ago, you are correct.

For Americans, events in Italy should serve as a cautionary tale. Despite the very substantial differences between our two nations, the politics of Italy and the United States are running in the same direction. Both nations have foul-mouthed populist leaders who reject convention, say what others dare only to think, and use social media to broadcast their messages. Both tendencies are anti-establishment and use targets such as immigrants to whip up political support. And both sides display a lack of concern and understanding about economic issues like debt and government spending that suggests future financial contagion awaits us all.

All of these political indicators reflect a central reality of Italian politics and political systems around the world: namely that collective demands for gratification are impossible to ignore. In the 2000 film Gladiator, the power of the mob is illustrated in the Colosseum of ancient Rome. The Emperor Augustus began the system of state bribery that Juvenal described as “bread and circuses”—a practice that remains very relevant given the corruption and patronage of modern Italy.

Whether we’re talking about Italy, America, China, or India, the potential for individuals to coalesce into a mob remains the ultimate political concern for all governments, democratic or not. The desire by M5S/Lega to stray from the EU’s strict austerity measures without leaving the union altogether evidences the pressures created by the fact that Italy has stagnated economically since joining the EU two decades ago. The Italians like the benefits of the euro, but they refuse to live like Germans.

As Christopher Clark wrote of the events leading up to the exile of Pius IX 170 years ago: “Did he really have a choice whether or not to bestow his blessing when thirty thousand citizens gathered in front of his palace at two in the morning?” Indeed not.

Christopher Whalen is an investment banker and Chairman of Whalen Global Advisors LLC. He is the author of three books, including Ford Men: From Inspiration to Enterprise (2017) and Inflated: How Money and Debt Built the American Dream (2010). He also edits The Institutional Risk Analyst, and appears regularly in such media outlets as CNBC, Bloomberg, Fox News, and Business News Network. Follow him on Twitter @rcwhalen.