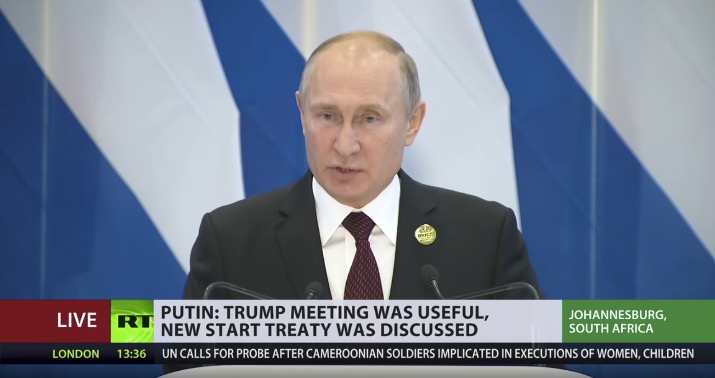 He doesn’t mention a timeline, saying only that the political environment needs to be right — but then he adds that he’s ready to talk and has in fact already invited Trump to Russia. Which suggests that he’d like to do it sooner rather than later.

A smiley Trump/Putin photo op at the Kremlin a month before the midterms would be magical for the GOP.

But back up. It was only a few days ago that one of Putin’s spokesmen suggested that they should hold off on meetings for awhile given the agitation in the U.S. over Russia. That was their way of snubbing Trump after he invited Putin to Washington; the White House responded to the snub with a face-saving statement from John Bolton insisting that any future meetings with Putin would happen in 2019 so that the “Russia witch hunt” could wrap up first. There’s no doubt, though, that Mitch McConnell and Paul Ryan also played a part by leaning on Trump not to have any more meetings with Putin before the midterms lest Democrats turn it into campaign fodder. The last thing Republicans need is another Helsinki-type press conference fresh in voters’ minds in November.

As chance would have it, POTUS is personally chairing a meeting of the National Security Council today at which election security will be discussed. That was public knowledge; I wonder if Putin had it in mind when he made the comments below, reminding Trump in a visible way that his dream of better relations with Russia is achievable so long as he doesn’t let his NSC advisors steer him towards a position of hostility. As chance would also have it, yesterday the Daily Beast published the first story (that I’m aware of) alleging Russian activity targeting a particular American pol who’s up for reelection this fall — Claire McCaskill, one of the most vulnerable Democrats on the ballot.

The Russian intelligence agency behind the 2016 election cyberattacks targeted Sen. Claire McCaskill as she began her 2018 re-election campaign in earnest, a Daily Beast forensic analysis reveals. That makes the Missouri Democrat the first identified target of the Kremlin’s 2018 election interference…

In August 2017, around the time of the hack attempt, Trump traveled to Missouri and chided McCaskill, telling the crowd to “vote her out of office.” Just this last week, however, Trump said, on Twitter, that he feared Russians would intervene in the 2018 midterm elections on behalf of Democrats.

The Beast claims there’s reason to believe that the operation was carried out by GRU, i.e. Russian intelligence, the same outfit to which the 12 Russians indicted by Bob Mueller for 2016 hacking belonged. Maybe that’s part of Putin’s calculation too in extending an invite to Trump: He knows American media will be hunting for evidence of further Russian attempts at interference this fall and he knows that, as evidence emerges, it’ll become harder politically for Trump to continue his outreach to Russia even if he wants to. No time like the present, then, for the Russian government to loudly signal its continuing interest in bilateral diplomacy to stay on the good side of POTUS and his base. If nothing else, it puts Putin in position to argue later, however half-heartedly, that it’s preposterous to think Russia would try to meddle in a U.S. campaign at a moment when it’s seeking face-to-face meetings with the president.