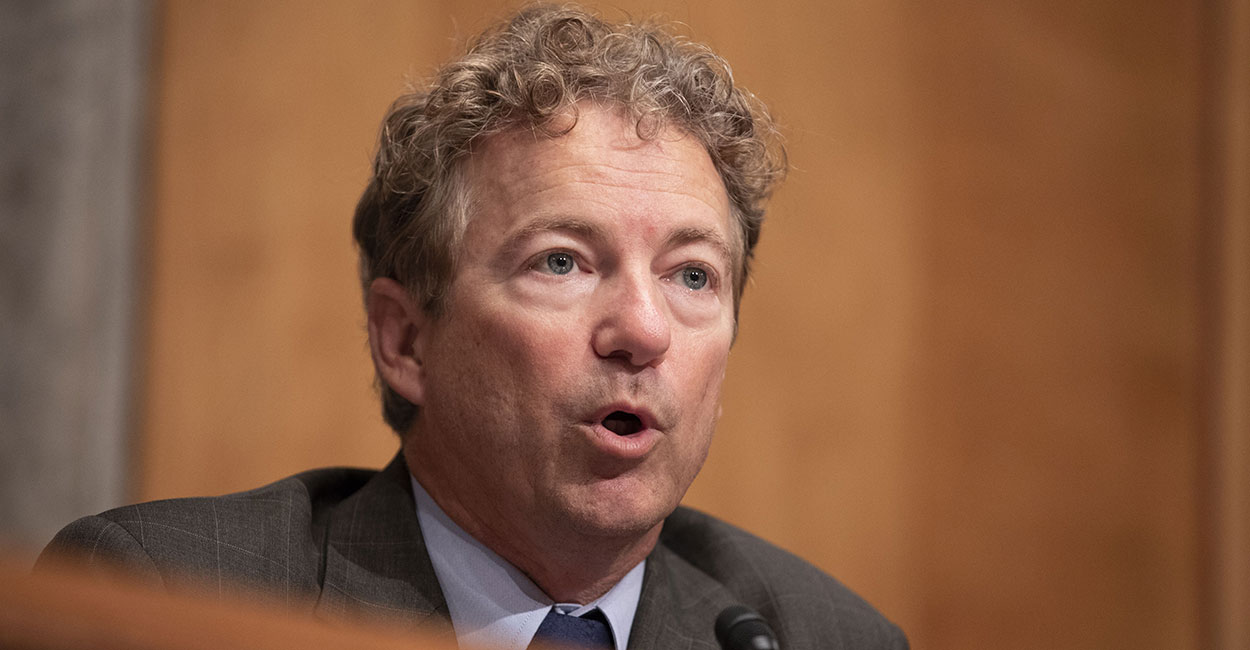 Sen. Rand Paul, R-Ky., talked about the scandals plaguing U.S. intelligence and law enforcement officials, the Russia probe, and why he gets along with President Donald Trump in remarks to conservative high school students at a dinner in Washington.

“Why do people distrust their government? Because we’re lied to by people in government,” Paul said Tuesday night during the event held at the Trump International Hotel as part of Turning Point USA’s High School Leadership Summit.

Paul spoke at length about his grievances with James Clapper, former director of national intelligence, and James Comey, the former FBI director.

“James Clapper came to the U.S. Senate in 2013, looked us in the eye, and lied under oath,” Paul said. “This is a felony. James Clapper should be in jail for lying to Congress.”

Critics such as Paul say Clapper lied when Sen. Ron Wyden, D-Ore., asked whether the National Security Agency collected “any type of data” on millions of Americans, and the national intelligence director answered: “Not wittingly.”

As FBI director, Paul said, Comey signed an application to a special surveillance court for a warrant to spy on Trump campaign aide Carter Page “based on two items, supposedly of fact.”

“Information that was gotten by the Hillary Clinton campaign,” Paul said. “She paid a [former] British spy, who then paid Russians. So, when people say, ‘What about Republicans and Russians?,’ the only person we know who paid the Russians was Hillary Clinton.”

Paul, who is known to enjoy the occasional round of golf with Trump, explained why their sometimes tense relationship works.

“Now, the president and I get along OK,” Paul said, “and I think it’s because I don’t always say yes to him. We get along because I’m my own person, and I will stand up and oppose him when I oppose him.”

Clapper and Comey, along with former CIA Director John Brennan, have become vocal critics of Trump in the media spotlight.

Paul joked that he agreed to speak at the event only if Turning Point USA founder Charlie Kirk let him stand by a “Big Government Sucks” sign, a trademark slogan the organization uses.

“The bigger your government, the less freedom you have. They are inversely proportional,” Paul said.

Paul concluded by citing an issue that is a sore subject with many on the right—the full repeal and replacement of Obamacare.

“Does anyone remember Republicans promising to repeal Obamacare?” he asked. “Does anybody remember them saying we’re going to repeal it ‘root and branch’? I heard it 10,000 times if I heard it once.”

Paul cited a lack of confidence in capitalism as the reason many lawmakers voted against repealing the health care law, formally known as the Affordable Care Act.

“They had insufficient confidence in capitalism,” he said, adding:

Capitalism and freedom of exchange is what made this country great. You have to have confidence that capitalism can fix the health care system. It doesn’t need to be about government. The real problems we have in health care is the absence of capitalism, of freedom. We can fix it. We need braver people.