Maxine Waters says she is sent by God to stop Trump 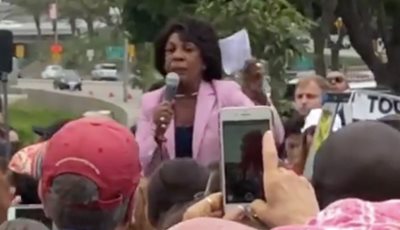 Rep. Maxine Waters (D-CA) is on a mission. A mission from God. She told a congregation at a megachurch just last Sunday that the pastor of the First AME Church in Los Angeles told her “When God sends you to do something, you just do it!” She’s been sent by God to stop President Trump, you see.

On Sunday, however, Waters suggested in a church sermon in Los Angeles that she’s on a divine mission to stop the president, blasting the Trump administration on a range of issues.

Addressing the congregation at First AME Church, Waters said, “You’ve gotta know that I’m here to do the work that I was sent to do, and as pastor said to me when I came in this morning, ‘When God sends you to do something, you just do it!’” she exclaimed to cheers from the crowd.

“So, I have a message. I’m going back to Washington tomorrow morning. I’m going to tell them pastor told me to come here and just do it!” she concluded.

You can watch the video HERE.

So now Auntie Maxine is blaming God for her Trump Derangement Syndrome (TDS)? You know when she went on with her airing of grievances against President Trump, I would have sworn the California Democrat, first elected to the House in 1990, was talking about another president. (Fox News)

“We never dreamed we’d have someone in the White House who was divisive, who could not tell the truth, and who was intent on not making America great again, but taking America down!” she said.

Funny, that’s my description of the eight very long Obama years. Don’t get me wrong, I’m not surprised by this deliciously crazy sermon to the faithful, but I am surprised to see that she leaned into her TDS so eagerly. She was one of the first Democrats to say Trump must be impeached, after all.

Just days before her declaration to do God’s work by trying to end Trump’s presidency, Rep. Waters was a tad less Christian-like as she told supporters to follow and harass anyone within Trump’s administration in public as they went about their daily lives. This tirade was set off by the Trump policy at the border separating children from adults until everyone’s status could be determined. She did it twice, once at a rally of supporters and then in an interview.

“Let’s make sure we show up wherever we have to show up. And if you see anybody from that Cabinet in a restaurant, in a department store, at a gasoline station, you get out and you create a crowd. And you push back on them. And you tell them they’re not welcome anymore, anywhere.”

Those instructions to her flock don’t exactly sound like she’s asking them to live by The Golden Rule. Her supporters also burned an American flag.

All of this politicizing from the altar in a house of worship brings up the subject of churches and tax exemptions. According to the IRS, “Churches that meet the requirements of IRC Section 501(c)(3) are automatically considered tax-exempt and are not required to apply for and obtain recognition of tax-exempt status from the IRS.” This has been in effect since 1956 and it’s known as the Johnson Amendment. Churches and pastors just can’t endorse candidates in a sermon.

Under the IRS regulations, churches and other nonprofits can engage in a wide range of activity related to public issues, such as advocating for certain policies. However, pastors and churches are not allowed to endorse a particular candidate in a sermon or during church services without potentially losing their status as an organization exempted by the government from paying taxes. Even so, the IRS rarely enforces the rule.

In May 2017, President Trump signed an executive order asking the IRS to show maximum discretion in applying the Johnson Amendment. The fact is, the IRS rarely takes away a tax exemption from a church. This is how politicians like Maxine Waters get away with such political maneuvers. She knew exactly what she was doing in that church and she was supported by a like-minded pastor and congregation. Fortunately, most churches respect the fact that it is unlikely that every member of their congregation is of the same political ideology. The clergymen and women keep it about the teachings of the gospel and not political rants.